MUMBAI, India — Anaita Shroff Adajania has three high-profile styling careers in three different industries: publishing, advertising and film. As fashion director of Vogue India, a commercial stylist, and one of Bollywood's top costume stylists, Adajania works at a powerful intersection in a country where film stars are the most bankable way to sell magazines covers and consumer products. Vogue gives her cred, Bollywood gives her clout and advertising gives her cash. It's hard to think of a smarter formula.

Raised in Mumbai (formerly Bombay), home of the Hindi film industry, Adajania once thought she wanted to be a filmmaker. She found film editing "tedious and dull… but the costumes and the sets, the aesthetic part, that captivated me.”

Vogue gives her cred, Bollywood gives her clout and advertising gives her cash. It’s hard to think of a smarter formula.

Before Karan Johar became one of India's most powerful film producers and directors, he was Adajania's classmate. While helping Johar cast the film Dilwale Dulhania Le Jayenge back in 1995, on which he was an assistant director, Adajania ended up being cast herself, appearing in a tiny bit-part. “A moment best forgotten" she says, were it not for two reasons: she tagged along with Johar to source her own wardrobe and got to watch rising costume designer Manish Malhotra at work on lead actress Kajol. That the film went on to become one of the longest-running and most widely-loved films in the history of Indian cinema helped Adajania make influential film industry contacts for life.

She joined Elle as a junior fashion editor when the magazine launched in India in 1996 and later expanded into advertising at a time when the profession of a commercial stylist hadn't yet been invented in India. “A junior person from the agency was usually sent out to buy some clothes in a bunch of primary colours," she remembers. “There was no budget and no thought for creating a look.” Sensing a gap, one of the country's original celebrity and fashion photographers, Farrokh Chothia, hired the young Adajania for his advertising jobs, devising a stylist's role for her. “If I remember right, my first commercial styling job was for Maybelline. I know they were fighting not to pay me. [Chothia] basically decided what I should get paid.”

Adajania may have "stumbled upon Bollywood,” as she recalls, but after Dilwale Dulhania Le Jayenge producer Aditya Chopra offered her the job of styling the Dhoom series — now the highest grossing film series in Indian history — her position in Bollywood was sealed and her style signature became widely recognised for putting a sexy modern gloss on contemporary Hindi pictures. 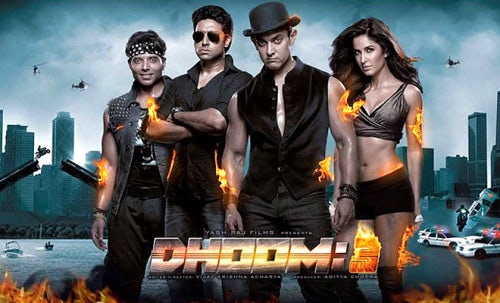 "Dhoom came in 2004 which was actually the perfect film for me because it was about making everybody sexy, which comes very naturally to me," she says. Over nine years, the series has featured all the big names in acting: Abhishek Bachchan, Hrithik Roshan, Bipasha Basu, Aishwarya Rai Bachchan and Katrina Kaif. In one scene, she styled Kaif in fetish-inspired, shiny head-to-toe leather and latex, a statement which gave mass Indian culture something to chew on.

Adajania is a rare Bollywood stylist who sees herself as a professional equal to the god-like film stars she dresses. Unlike many of her colleagues, she refused to let the whims of actors dictate her mood board. "If a beige trench coat is what they're supposed to wear, then it can't be a blue short jacket. I'm not going to let it pass just to keep the actor happy. I'll keep fighting. Before working with Hrithik in Dhoom 2, I had heard he was very particular. I was petrified and I was young. When I went to meet Hrithik, I said, ‘If we're going to work together we have to be honest.’ I told him he wears his pants too high and too tight."

Adajania makes a point of differentiating herself from Bollywood’s costume designers. “I'm not a costume designer and I don't sell clothes. I never style with what's going to come out of it in mind, as in, how much that outfit will sell afterwards — which is what a lot of Bollywood costume designers do.” Her team sources off the racks, but she often collaborates with designers to make or customise special outfits. Yet Adajania’s eye drives sales. “Some people have been honest enough to tell me that, for example, the precious necklace I made a big celebrity wear was sold twenty-two times." 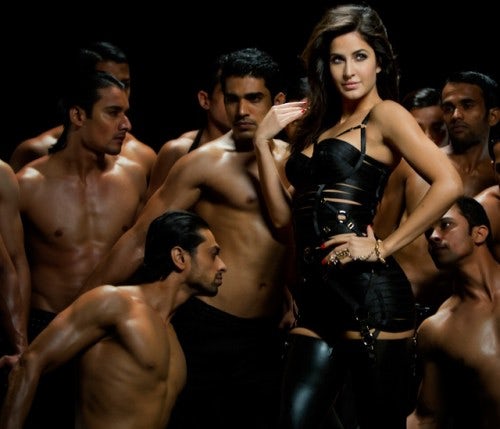 On the peculiar challenge of styling for Bollywood, Adajania says: “In Hindi films you go between reality and a complete loss of logic. Like suddenly the actor will have to break into a song while walking down a street. In the context of our films, it's completely natural, but the costume has to be friendly to that. When she starts shaking her hips how will she look in what we've given her to wear?"

Yet fashion — not film — is closest to her heart. "My fashion relationships run very deep," Adajania says. "Film, on the other hand, is not my background. I'm still the South Bombay girl who works in Bollywood.”

When Vogue entered the market, in 2007, Adajania was ideally poised to take advantage of her position at the nexus of fashion, advertising and film, with two editorial roles (Elle and L'Officiel), five Bollywood films and ads for L'Oreal, De Beers and Coke (among others) already under her belt.

"What I love the most is editorial. There's no doubt about it. I joined Vogue eight years ago and my responsibility is to produce the best covers and fashion editorials, but also, importantly, and what is often unsaid, is that we decide and interpret the season's trends for India.” This month's cover is considered a top score: Adajania chooses the Seventies, a global fashion trend for spring/summer 2015, and translated it for the Indian market by tapping Bollywood megastar Aishwarya Rai Bachchan and styling her in a Tommy Hilfiger faux fur gilet, Saint Laurent blouse and fringed hairstyle. 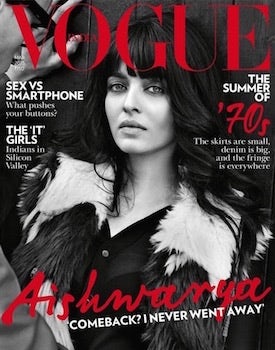 "I feel strongly that as a fashion magazine, or just as fashion individuals, it's important we help bridge the gap between India's craftsmen, designers and the market. Because otherwise this craft heritage will be gone in a blink. I do feel this responsibility. As well as to balance domestic and international fashion in the way we, as Indians, dress. It's a mix almost every day. If I'm going to wear an ikat shirt, for example, I might wear it with [western] trousers, and not necessarily with an [Indian] salwar. Which is how I want more and more Indian women to dress. Ensemble, Le Mill, Bungalow Eight, Good Earth…these local boutiques are now presenting mixed fashion ensembles while Vogue fashion editorials decode this new dressing style for you in a way that's cool and comfortable. That's the aim.”

In addition to her other work, Adajania takes on celebrity styling on a “per outfit” basis. It's a relatively new source of income that has grown along with the rise of paparazzi culture in India, red carpet events (especially film awards) and Bollywood style blogs, which track it all, day by day. Her most regular red carpet clients are actors Deepika Padukone, Kangana Ranaut and Hrithik Roshan.

Her styling consultancy, called Style Cell, which is made up of Adajania, six stylists and an accountant, can also be hired for workshops for corporate clients, personal makeovers or “helping new designers find their voice.” Adajania heads a second team at Vogue India, which, along with her work for Bollywood, put immense demands on her calendar. "I don't know whether it's my upbringing, but being on time and sticking to your word — these were never optional when I grew up. The reason I can work at a place like Vogue and do everything else is because I've always delivered what I've committed to, whether it means staying up after my kids go to bed to research.”

“Don't take short cuts, especially while training,” she advises. "People make the mistake of thinking that if they assist a stylist for three months they know everything. But give it at least a year. And if you've found the best person in the business, then give it three years. Not only will you learn how they work, but you'll get to know people who could totally sort you out for the rest of your life. It's important to sweat it out, too. To avoid mediocrity you must regularly push yourself.”