BARCELONA, Spain — David Vivirido and Francesco Sourigues like to use the term “power-woman,” along with the descriptor “woman on top.” In fact, that's how the duo sums up both the subject matter and target audience of their new magazine, Vamp, which launches next week. 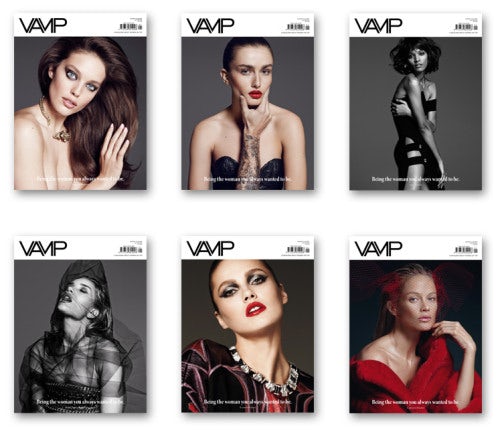 While most dictionaries define “vamp” as a wily femme fatale on a mission to use her assets — often sexual in nature — to get her way, Vivirido and Sourigues have expanded the concept to include any woman in control — of her life, wardrobe, desires, career and self-image. Whatever she is, a vamp definitely isn't shy or passive.

If the notion of an assertive, intelligent woman unafraid to be seen as sexy doesn't seem new, it’s undoubtedly unusual in the context of a current style culture that favours the anti-glamour of the Céline-clad careerist. "The clothes are quiet and not meant to make a statement. And so you look invisible. This is power dressing," declared a recent story in The New York Times T magazine on Céline designer Phoebe Philo.

Vivirido and Sourigues beg to differ and are launching their new editorial venture on the very premise that there’s nothing more chic than a successful, self-possessed woman who embraces her attributes, whether innate or enhanced, with an all-out lust for fashion and luxury. "Vamp is for women who want to get ahead, stamp their foot and make a statement," Vivirido asserts.

Accordingly, the magazine features profiles and portraits of women at the top of their game, as well as strong, yet refreshingly unconceptual fashion spreads shot by emerging photographers, all in a straight-forward aesthetic that harks back to American fashion imagery from the 1970s and 1980s. "It's about inspiring women with stories about other successful women. It’s not another magazine for fashion people, it’s for real women, power-women, women on top, who like beautiful things — clothes, hair, skin," Sourigues says. 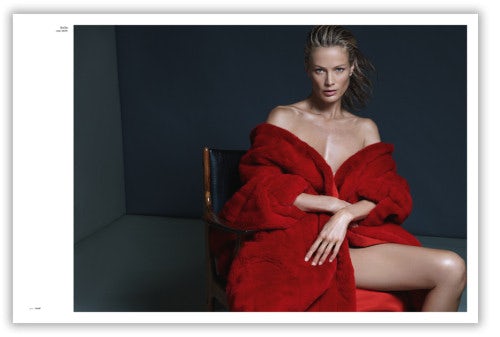 A spread from Vamp | Source: Vamp

"Magazines no longer bring news to the table. If you want to know what’s going on, you go online. So publications like ours are an extension of lifestyle, they are beautiful books, an aspirational and inspirational object," says Vivirido.

"You just want to be part of that world," continues Sourigues, "that's what we achieved with Hercules. I don't know if it's good or bad, or what people think about it, but we found our way and we found a voice, which is definitely very different to everything else and it’s what we wanted to talk about — a healthier, sexier, more Mediterranean and more classical conception of beauty."

Launched in 2006, when Vivirido and Sourigues were both 25 years old, Hercules was the duo’s first brainchild. At the time of its inception, the bi-annual men's fashion magazine was brazenly devoted to celebrating beautiful men, in and out of very expensive clothes in dream-worthy locations. It was a bold, sexy and unabashedly aspirational proposition. And while the concept may have been risky, it’s paid off. While still a niche title, Hercules now sells in 39 countries around the world, with a particularly strong commercial presence in the United States.

"Everything we have achieved over the last eight years has been self-made, not being part of a group but fully independent, and we've had to learn the process as we go, by making mistakes. When we started this, we had no idea about things like distribution or advertising, not to mention how to run a company," says Vivirido.

Vivirido and Sourigues, who hail from small towns in Spain and Argentina, respectively, cut their teeth in the heady editorial scene of London of the early aughts, working as assistants and freelancers for titles such as The Face, Arena, and Dazed & Confused. But finding the British fashion magazine scene cliquey and unreceptive to their sensibility, they decided to forgo London and create their own publication, following only their own rules, far away from the city’s established system and aesthetic codes. "We couldn't launch a magazine in London. It wouldn't have survived because of the views we had and the editorial scene at the moment, so we thought, 'Ok, let's channel our vision through a different country, an emerging country." And while the market for fashion magazines in the UK was crowded and competitive, Spain was hungry for new titles, so Vivirido and Sourigues decided to relocate to Barcelona.

If the concept for Hercules was simple — a return to the ideals of male beauty, as embodied by the photography of people like Aldo Fallai, Herb Ritts and Bruce Weber — the magazine was also meant as a retort to London fashion’s school of anti-beauty and grunginess, where style was more likely to be equated with trash and eccentricity than traditional Greek ideals of a perfect physique and overt sensuality. "We wanted to get away from a British-centric idea of what an image should look like," says Vivirido.

But with the very boldness of their gamble — starting a magazine on their own with close-to-no experience — came a significant set of challenges. "I thought it was all about looks, but suddenly we had to run a business,” says Sourigues. “We come from styling, which is a very different thing to being an editor or a publisher or running a company."

While Vivirido handles marketing, PR and advertising, Sourigues is in charge of layout, art direction and graphic design. "You have to know how printing works, what paper reacts well with what ink, and you only learn these things from doing it,” Sourigues says. “Distribution, too, is very complicated and expensive, and it takes a lot of time to get to know a market and where to sell. If you get it wrong, you can easily fold.” For Vivirido, advertising is by far the trickiest part of doing a magazine, "You can talk about your creative vision for hours, but it’s just as important to know what to say when you sit at a table with business people and they start asking for figures and clear targets.” In reality, running a sexy coffee-table magazine isn’t all glamour, “there is a lot of bureaucracy, meetings with the bank, with accountants — taxes, lawyers and copyrights to deal with.” Sourigues puts it plainly: "At the end of the day this is a business. We are obviously driven by passion and love being creative, but we need to make money to pay our rent."

What’s more, neither is disingenuous about their reasons for launching Vamp. "To be honest, as a business, [a women's magazine] has a lot more potential than a men's magazine. Women's is a bigger, broader, but also tougher market. There's lot more money to be made, more readers, but also more advertisers," says Sourigues.

Sourigues got his start as a stylist; Vivirido in PR. And both say their success has been helped by the professional connections they have made along the way. "We have been lucky to have very good friends, people that got us in touch with key people, such as Andrew Davis, my old boss at Arena, who introduced us to their sales agent at the time, who became our sales agent in Milan. That changed everything, having someone who knew what they were doing, because at first we were doing it all ourselves, which was insane. Think about it, trying to go to Milan and sell advertising for a magazine made in Spain by two unknown 25-year-olds — it was crazy."

As the duo matured, their magazine, too, evolved. Today, Hercules is as much about travel and living well as it is about and sexy bodies. “After five years and 10 issues, we decided to reshape the magazine drastically. What we were doing before was a lot more sexy, bolder, involving a lot more skin. But all of that you could now find online. Also our interests had changed, we were not in our twenties anymore. And you can't really talk about and sell something that you don't identify with. So, increasingly, travelling became a focus,” explains Sourigues. “We are inspired by those epic Richard Avedon shoots in Africa when people had the time and the money to go on these amazing journeys to produce great stories and get the most superb imagery.”

"Find your own way, you will not regret it,” advises Sourigues. “This is everything I wanted to do and more, but I got here by just doing it, even when I didn't know how. It's alright to do mistakes, there’s nothing worse than to be afraid to make mistakes."

"No one will open a door to tell you how this business works, so you need to find your own way,” Vivirido agrees. “But also, patience is key, this is a very slow system. And remember to always treat everyone on the same level, because you just never know who will be your boss the next day."