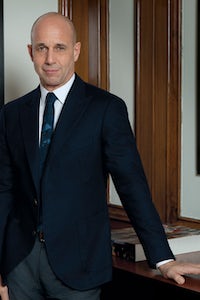 Massimo Piombini has left Balmain with immediate effect, after joining as chief executive from Valentino in April 2017. A statement from the company said that Piombini’s departure was for personal reasons, and that his replacement will be appointed in February 2020.

Tiffany board member steps down

Former Bulgari Chief Executive Francesco Trapani has stepped down from his position on the board of Tiffany & Co. with immediate effect. Trapani held the position since March 2017. According to documentation the company filed, his resignation was not due to any internal disagreements.

Macy's has announced the departure of President Hal Lawton, whose resignation takes effect December 6, 2019. The company has not yet named a replacement for Lawton, who joined the department store in 2017 and is leaving to become chief executive of Tractor Supply.

Unilever has announced a number of changes to its executive team, including the appointment of Conny Braams, formerly executive vice president, Unilever Middle Europe, to the newly created role of chief digital and marketing officer. The company also announced the retirement of North America President Amanda Sourry and her successor Fabian Garcia, formerly president and chief executive of Revlon. Both appointments take effect January 1, 2020, with Garcia reporting to Chief Operating Officer Nitin Paranjpe.

Ulta adds to board of directors

Clothing brand Gant has promoted Executive Vice President for Global Markets and Sales Patrik Söderström to chief executive of the company, effective February 1, 2020. Söderström replaces Brian Grevy, who will depart at the end of January 2020.

Marks & Spencer has appointed Anthony Cassidy as head of brand creative, effective spring 2020. Cassidy joins the company from Topshop owner Arcadia, where he was creative director. He will report to Nathan Ansell, M&S clothing and home marketing director.