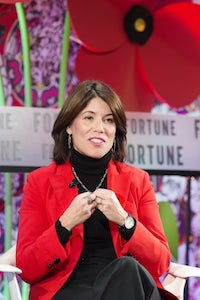 Following the decision to take Hudson’s Bay Company private, Chief Executive Helena Foulkes will step down effective March 13, with Executive Chairman Richard Baker named as her replacement. Baker will assume the role in addition to his existing position at the company.

Printemps has announced that Chief Executive Paolo de Cesare exited the department store on February 28, 2020, following several years of “challenging performance,” according to a company statement. The search for de Cesare’s successor is underway.

Federico Marchetti is stepping down as chief executive of Richemont-owned Yoox Net-a-Porter Group, with a successor yet to be named. Marchetti, who co-founded Yoox in 2000, will remain chairman of the company.

Mango has named Toni Ruiz chief executive with immediate effect. Ruiz first joined the company in 2015 as chief financial officer and board member, and was made general manager in October 2018. He loosely replaces Founder Isak Andic, who technically held the top executive job at Mango but remains the company's owner and chair of the board of directors.