This week, Felicia Mayo, former head of diversity at Tesla, replaced Kellie Leonard in a similar role at the American sportswear giant. 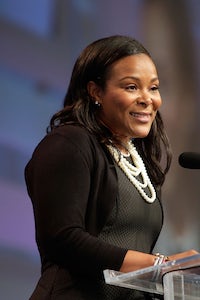 This week, Felicia Mayo, former head of diversity at Tesla, replaced Kellie Leonard in a similar role at the American sportswear giant.

Finance chief Debi Chirichella has been appointed interim president of Hearst Magazines following the resignation of Troy Young, after an exposé by The New York Times surfaced allegations of lewd remarks and other inappropriate behaviour.

Mathieu Sidokpohou, who most recently served as the vice president at Danone Dairy & Plant Based, will replace Guillaume de Monplanet as managing director of France.

Adam Meek has been appointed to the newly created role of general manager of footwear and accessories at Canada Goose. Meek, who has over 20 years of experience in the footwear industry and has held various leadership positions at Nike, Lacoste and Sperry, will oversee the brand’s global footwear strategy and accessories collection. He will report to Woody Blackford, the executive vice president of product at the outerwear brand.

Under Armour taps senior director of sales from VF Corporation

Phil Fox, previously the senior sales director for Vans in Europe, the Middle East and Africa, has joined Under Armour as the senior director of sales for the EMEA region. Fox will report to Massimo Barratto, the managing director for the region, and will oversee the development sportswear brand’s digital-first and growth strategy in the region.

Drieke Leenknegt has been appointed vice president of global marketing at Timberland, succeeding Argu Secilmis who has taken on a new role as vice president of global apparel. Leenknegt, who has held several senior leadership roles at Nike, will oversee the outdoor footwear retailer’s global brand marketing, working closely with marketing leaders in the Americas, APAC and EMEA regions.

Moose Knuckles add to its board of directors

Daniella Vitale, executive vice president and chief brand officer at Tiffany & Co., has been appointed to Moose Knuckles board of directors. Vitale, who has previously held senior leadership roles at Gucci, Giorgio Armani and Salvatore Ferragamo, will use her experience to assist in the luxury brand’s international growth strategy and will work closely with the executive team as a guide and mentor.

Kate Blythe, who most recently served as chief content officer at MatchesFashion, has been appointed advisor to The Yes — a shopping platform which has partnered with over 150 brands, including Prada and Oscar de la Renta. In her new role, Blythe will oversee the platform’s brand partnerships and editorial strategy.

Eurazeo adds to its executive committee

Jill Granoff, chief executive of Eurazeo Brands, has been appointed to investment firm Eurazeo’s executive committee. Granoff joined the company in 2017 to launch Eurazeo Brands, which has invested $260 million in five ventures across the fashion, beauty, lifestyle and food and beverage industries.

Nikki Humphrey, who most recently served as chief people officer at Virgin Atlantic, has been named people executive director at British department store chain John Lewis, effective October 1. In her new role, Humphrey will oversee the retail group’s development of a people strategy for its 80,000 employees.