NEW YORK, United States — “What we all aim for is to make it more approachable, but that doesn’t mean low end,” said Edward Enninful, who, as style and fashion director of W, is a critical part of the international A-team that’s been tasked with transforming the iconic Condé Nast magazine, which has seen the top tier of its masthead completely turn over in a series of shakeups since Stefano Tonchi’s appointment as editor-in-chief in early 2010.

Since joining W last April, 40 year-old Enninful, whose team now includes Marie-Amélie Sauvé and Giovanna Battaglia, has moved the magazine’s fashion editorial towards greater and more direct emphasis on the woman. “Sometimes in the past, you didn’t see the woman. You’ll see a cloud, you’ll see a forest and you have to find a woman that’s in there,” explained Enninful. “But the woman is first for us. No matter what the context of the photography is, the woman has to be very present.”

A spellbinding Kate Moss cover story for magazine’s March issue, styled by Enninful and shot by Steven Klein, marked something of a turning point for W, which, after a reboot that has not always been smooth, now appears to be hitting its stride. 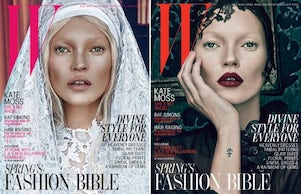 On the landmark story, which has been described by industry insiders as “pure Edward,” Enninful said: “I saw a picture a couple of months ago of a rosy cheeked girl with a very round face looking really angelic, like she was going to Sunday school. I fleshed out the character and you end up with a picture of Kate Moss wearing a mantilla on the cover of W.”

“Before anything starts, I need to know whom the character is,” said Enninful of his creative process. “Who is this woman? What are her dreams? What are her aspirations?” he continued. “The second step for me is the location. Where does she live? What world does she inhabit? Then once that’s fleshed out, I go to the photography. How do you shoot her? What angle?”

The story of Enninful’s start in fashion is the stuff of industry legend. Born in Ghana, he moved to the Ladbroke Grove area of London with his parents and six siblings while still very young and, at the age of 16, was spotted on the tube by stylist Simon Foxton, who asked him to model for Arena and i-D magazines. It was a pivotal moment that Enninful describes as his “baptism into fashion.”

“Back then, the majority of modelling was just free editorial and then you do tons of music videos,” recalled Enninful, who modelled and danced in TV music programmes like “Solid Soul,” Britain’s version of “Soul Train.” But Enninful knew early on that he wanted to be a stylist. “When I was modelling, I would bring my own clothes to the set,” he recounted. “I was into clothes. I was making clothes with my mom, who was a seamstress when I was growing up.”

Within weeks of first meeting Foxton, Enninful was shooting with the photographer Nick Knight, who soon introduced him to Terry Jones, founder of the influential youth culture magazine i-D. “I assisted the fashion director at that time, Beth Summers, and when I was 18, Beth decided to move on and I was made the fashion director. That’s how I started,” said Enninful.  It made him the youngest ever fashion director at an international magazine.

“It was about fashion and music going hand in hand,” said Enninful, a self-described club kid, of the late 80s and early 90s scene in London. And it was through nightlife that he built lasting relationships with some of the biggest names in fashion, including David Sims, Pat McGrath, Craig McDean, Mario Sorrenti, Kate Moss and Naomi Campbell. “We went to rock and roll clubs, we went to soul clubs, it didn’t matter, and it was one big melting pot,” recalled Enninful. “We all came from the same place. We all had a sort of punk rock aesthetic.”

At i-D, Enninful produced a body of groundbreaking work — often inspired by nightlife and the streets, and featuring finds from Portobello, Camden and Kensington markets — that captured the intoxicating energy of London fashion at the time. “You always wanted to be the most original. If you had a leather jacket, you would customise it with safety pins or paint,” recalled Enninful. “It was great time for creative freedom.”

But Enninful’s most impactful piece of work may well have been his collaboration with Franca Sozzani and Steven Meisel on Vogue Italia's historic July 2008 'All Black' issue, which featured only black models, including Naomi Campbell, Jourdan Dunn and Alek Wek, and became the top selling issue in the publication’s history. 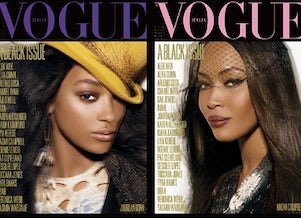 “I was happy about the black issue,” said Enninful who is still one of a handful of people of African origin to hold a prominent position in the fashion industry. "But I’d be even happier when it’s just the norm and not necessarily always a special issue; when every time you open a magazine, you see a black model, a white model and a Chinese model."

Over the years, Enninful — who eventually became a contributing fashion editor at American Vogue in 2006 — has seen his job evolve significantly. “We went from styling little fashion shows for friends, little free editorials, to helping direct designer collections and shape advertising.” Indeed, alongside his editorial work, Enninful has created campaigns for blue-chip brands including Versace, Dolce & Gabbana and Calvin Klein. “When you work with a brand, you’ve got to remember that it’s not about you,” he said. “It’s about working within the constraints of a company to bring the best out of the company.”

For Enninful, the rise of digital media has also been a driver of change. “I don’t know if it’s actually changing my way of working,” said Enninful. “A good stylist can work in any medium whether its still photography or moving image. But it adds another facet to the whole job of styling. The times have changed so much and still images can’t just sell on their own anymore,” he added. “I think for every shoot we do, we have to think about how it moves,” he added. “That’s with us now and its going to be like that for a long time.”

“Blogs have had a huge impact on stylists too,” said Enninful. “Sometimes how a stylist looks can be as important as the work she produces,” he added, referring to the growing importance of street style blogs. But while many fashion bloggers curate the world around them as they experience it, “stylists’ roles extend beyond the minute,” he continued. “We have to look a season ahead, two seasons ahead… it’s basically like fortune telling.”

But Enninful is by no means immune to the past. “Last March, when Kate [Moss] and I did the cover for W, we were reminiscing about the old days and how far we’ve come. And how far fashion has come.”

Robert Cordero is a contributing editor at The Business of Fashion. Photography by Kevin Trageser.