NEW YORK, United States — The coronavirus pandemic is a serious threat to Condé Nast and Hearst, the publishing giants which operate many of the world’s glossy fashion magazines. Last week, salaries and executive pay were cut at Condé Nast, which expects to lay off a “low single-digit percentage” of its 6,000-person global workforce. Its biggest competitor, Hearst Magazines, has yet to announce pandemic-related cuts; facing a union fight, it has actually bolstered employee benefits and given all employees a 1 percent pay hike. But with stores closed and sales sharply down, most fashion and beauty brands have slashed their advertising budgets, a major source of revenue for publishers, putting both Condé Nast and Hearst under pressure.

Four out of five marketers from major international companies say they will defer planned campaigns, according to a March survey by the World Federation of Advertisers. And a series of surveys by Advertiser Perceptions reveals a fast-worsening outlook among marketers and media buyers: 44 percent now say they’ve canceled a campaign pre-launch; 72 percent expect to spend less in 2021.

Fashion media was struggling before the crisis. Over the last decade, print advertising dollars have declined precipitously, as consumers shifted attention online. But for magazine publishers, squeezed by the dominance of Facebook and Google, digital ads have not made up for the losses. Seemingly promising revenue streams, like affiliate marketing revenue and events, have remained relatively small. And unlike The New Yorker or The New York Times, no major consumer fashion or lifestyle title has been able to build a robust digital subscription business. This leaves major fashion publishers still overly dependent on falling print advertising sales. At Condé Nast, for example, print still accounted for 36 percent of revenue last year. 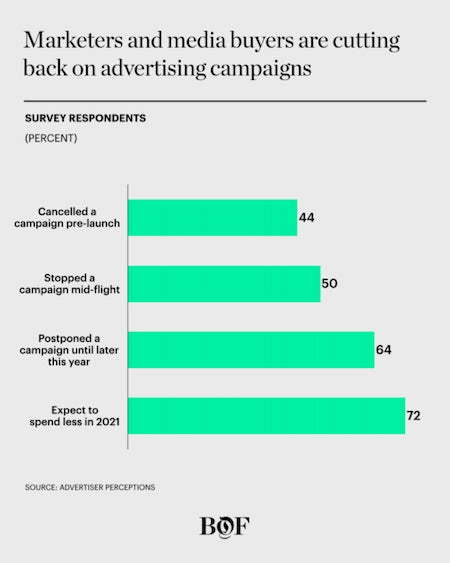 The pandemic is sure to accelerate the decline. Circulation is made up of subscriptions and newsstand sales. These days, single copy sales make up only a small fraction of total circulation. And the crisis actually drove up sales at supermarkets, Target, and Walmart last month, but the bump is unlikely to offset the decline from thousands of closed newsstands. As for subscriptions, things may be more stable, yet these figures have always been inflated by agencies that distribute magazines to libraries, offices, hotel lobbies and the like, many of which are currently closed.

Sliding circulation numbers aside, there’s another problem with print advertising: its effectiveness is hard to measure, making it an obvious budget cut for marketers, even if it offers high-quality brand positioning, leaving publishers ailing. To make matters worse, the comparatively meagre revenues generated by the affiliate programs run by companies like Amazon and Macy’s are being cut. And live events are off the table for the foreseeable future.

It’s still far from clear when the public health emergency will subside and the economy will bounce back, though a V-shaped recovery looks highly unlikely. “People are running lots of different scenarios, which in turn makes it challenging for the publishers,” said Justin Fromm, executive vice president of business intelligence at Advertising Perceptions.

So, where does this leave major fashion magazines? Fast forward to January 2021 and here’s what best-case and worst-case scenarios for fashion’s media giants could look like.

It’s the first Monday in January and millions of people have just returned home from holiday vacations. Christmas trees were flush with gifts because people felt comfortable going to malls and shopping. New Year’s celebrations went off as usual around the globe, with fireworks displays signifying humanity’s triumph over the coronavirus, starting with a rapid ramp up in testing and the end of social distancing in the second quarter of 2020.

By now, the economy has recovered significant ground. Consumers feel confident spending money again and most have largely resumed normal life. People fly for business and pleasure and commute to work, passing in and out of newsstands like they once did. Libraries and offices have reopened, with their familiar array of magazines. What’s more, ad sales never dropped off as sharply as some expected. “The truth is, most advertisers understand the importance of advertising through an economic downturn,” said Fromm.

The truth is, most advertisers understand the importance of advertising through an economic downturn.

During the worst days of lockdown, news consumption was up 80 percent, driving page views that would normally be challenging to monetise. But brands, following eyeballs, came around to running their ads against news content on the pandemic. Publishers also proved adept at engaging consumers with content catering to life at home, gaining an edge in the streaming video market at a time when many film and television productions were on pause.

Some consumers even rediscovered their love of old magazine brands, immersing themselves in longform stories and finding escape through fashion photography. Brands, too, returned to time-tested channels, shifting marketing spend away from influencers — some of whom appeared superficial and lost traction during the pandemic — and back to magazines. The result was millions of engaged readers, rising advertising sales and increased subscriptions, breathing new life into a once-ailing business model and allowing giants like Condé Nast and Hearst to increase their investments in quality journalism and photography, reasserting their cultural relevance.

New York’s Times Square was empty on New Year’s Eve after a second wave of infections forced many Western nations, where government measures for fighting the virus have been less effective, to reinstate social distancing measures. The holiday shopping season was brutal, down more than 50 percent year-on-year and as the economic contraction continues to worsen.

People stuck at home have increased their engagement with apps like TikTok and Instagram, but fashion publishers haven’t seen a bump. Affiliate shopping programs have stalled, while events show no sign of returning. Worse of all, advertising revenue has essentially flatlined.

“Several analysts have come out and suggested that we be seeing third and fourth quarter return to a degree of normality, which we're simply not seeing as being a practical and honest looking at the marketplace realities,” said Jack Myers, who has tracked the ad spending market for decades. Myers forecasts an overall decline in ad spend this year of 20 percent.

“That includes the growth in categories like online video and YouTube advertising, and then some smaller categories like interactive television, podcasting,” he said. For legacy titles, the drop could be more like 35 percent to 40 percent for print, and 10 percent to 15 percent for digital channels, which now account for about half of total revenue, he added. “We're all charting new territory. These numbers changed over the last month as it became clearer that Covid-19 was going to have sustaining impact on the general economy that weren't anticipated in a lot of the early forecasts.”

In a worst-case scenario, illustrious titles, unable to pivot their business models, would be forced to close.

In a worst-case scenario, illustrious titles, unable to pivot their business models, would be forced to close (unless the Hearst and Newhouse families that control Heart Magazines and Condé Nast, respectively, are willing to endure years of losses). The weaker titles would shutter first, while more profitable, more influential brands, like Vogue, would be the last to close or be sold off.

How to Move Forward

If the last decade plus of disruption in media hasn’t inspired radical change at legacy media companies, the time has come. And I don’t mean just a pivot to video or doing better on social media or covering news relentlessly or dabbling in ticketed events. I mean real, fundamental change that makes media brands as vital as they used to be.

This might mean killing magazines that were created 50 or 100 years ago that can’t be forced into a post-pandemic Internet age, no matter how hard anyone tries, perhaps replacing those titles with a series of upstart media properties built around rising podcasters and influencers with genuine points of view. And along with rationalising and reinvigorating their portfolio of brands, media companies must reimagine their business models, shifting away from dependency on dwindling print advertising sales and a pageviews arms race.

“Reinvest in your brands. Get out of the commodity marketplace. If you're stuck in the commodity marketplace, cut your losses,” said Myers. “Sell your strengths.” And those strengths do not translate to scaling audience. Specifically, Myers sees opportunity for legacy media brands, which still resonate with multiple generations of consumers, to become curated shopping platforms in partnership with brands that will need their help most as the economy recovers.

But there will be no one-size-fits-all solution. The right approach will be different for every title. Some will be able to charge for their content; some will launch new services and experiences that don’t yet exist. Maybe it’s a paid horoscope app; maybe it’s a personal styling service that sits atop the world’s e-commerce giants; maybe it’s a series of ticketed fashion shows. Whatever it is, it will require a hard look at what each title can uniquely offer in a world where we will all be poorer, but perhaps hungrier for escape and inspiration than we’ve been in a long time.

At Condé Nast and Hearst, It’s About More Than the Current Crisis