BoF columnist Susanna Lau, aka Susie Bubble, says the London College of Fashion's MA program, with it's focus on wearability, deserves attention alongside the creative powerhouses of Central Saint Martins and the Royal College of Art.

LONDON, United Kingdom — A few weeks ago, whilst international editors and buyers were still in New York, or taking the bleary transatlantic red-eye for that often sleepy first day of London Fashion Week, some of us were already off to shows. The London College of Fashion’s MA show wasn’t strictly speaking on-schedule, but was widely anticipated and marked the first time the school was showing as part of London’s broader fashion week infrastructure (previously, LCF held its MA show at the beginning of February).

With Central Saint Martins also staging its MA show at Somerset House later that evening, the whole day felt like it had been dedicated to the schools that effectively feed London fashion. CSM’s illustrious alumni list is, of course, well known. But LCF can claim the likes of Jonathan Anderson and James Long, as well as shoe designers Nicholas Kirkwood and Charlotte Olympia, who came from Cordwainers, a part of LCF.

As rays of sunlight streamed into the Royal Opera House in Covent Garden, where LCF’s show was held, ten collections (six womenswear and four menswear) were presented to the assembled press, friends and family members, as well as a panel of external judges, including Lou Stoppard, fashion editor of SHOWstudio. “I was completely amazed by the incredible talent and finesse of this year's students,” she told me. “Their creative prowess and imagination was matched with a firm understanding of current fashion moods and commercial requirements.” 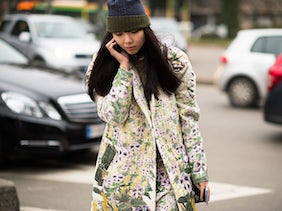 What struck me immediately was the highly edited and varied selection of work. The show’s less-is-more approach was smart and meant that every student’s collection felt memorable. Keiko Nishiyama’s quintessential English garden prints were blooming in my mind. I loved Min Wu’s beautiful hand dip-dyed sculptural pieces, inspired by the artist Anthony McCall. And Nadia Scullion’s use of silicone cast basket weave embellishment was intriguing.

On the menswear side Na Ding clashed Chinese realist paintings with Western hip hop culture and Octo Cheung presented deconstructed tailoring inspired by ancient alchemy. You came away from the show with a clear idea of each student’s vision.

Later that evening, Central Saint Martins also presented a tighter edit than in previous seasons, with only fourteen students getting the opportunity to show. It’s simplistic to try and compare the two colleges, but at the same time, it’s hard not to. Overall, the LCF MA collections had a more wearable sensibility; a sense of tangible reality. Nigel Luck, director of the womenswear MA course at LCF, is reluctant to pinpoint the exact differences between the two schools, but he does say that LCF’s final collections are not about concept alone. “I’m not about ramming an idea out. I’m trying to encourage students to create a mix so that there are garments which can be hung up immediately in, say, Selfridges. At the same time, there are pieces that are more about showmanship.”

Indeed, the immediate wearability of the LCF MA collections meant that I ended up wearing a few pieces by a few of the graduates during the course of fashion month, ensuring that I spelled their names out clearly for the people who asked.

LCF hopes that the students who show at London Fashion Week come away with contacts, opportunities and exposure, which can lead them to starting their own label or finding a job within the industry. Whether there is an equal pool of job opportunities for all MA graduates is another matter. “I hope that in a few years time the LCF MA show will be recognised alongside the CSM and [Royal College of Art] shows and that fashion houses will recruit directly from the end of year show, as currently happens at those other institutions,” says Scullion.

Even if it’s unspoken, there’s long been a pecking order of fashion colleges in London and CSM is still very much considered to be top of the pile. But LCF’s new presence at London Fashion Week is a great way of showcasing the diversity of graduates that are coming through the school.

“London is a growing fashion city with increasing room for all types of talent, whether they are pioneering and super creative, or more pragmatic and business focuses,” adds Stoppard. “That breadth of approaches is what makes London so unique.”