Today, in the second instalment of Bubble and Speak, columnist Susanna Lau, a.k.a. Susie Bubble, examines the work of Steven Tai.

LONDON, United Kingdom — For the last 27 years, the Hyères Festival of Fashion and Photography has been a hotbed of design talent, producing grand prize winners like Viktor & Rolf, Felipe Oliveira Baptista and, more recently, Anthony Vaccarello. I attended Hyères in 2007 and 2008 and was impressed by how the tranquil and nurturing atmosphere of the festival enables early stage designers to really express their vision.

Last year, Central Saint Martins BA graduate Steven Tai took home a special €15,000 prize, sponsored by Chloé, with an impressive collection (his final graduate collection) inspired by bookbinding. I first stumbled upon Tai’s work when he showcased the winning collection at Milan’s White tradeshow and was immediately struck by its built up and padded out proportions. Take a closer look at the exaggerated shapes and you find yourself mesmerized by the dense textures of layered fabrics, mimicking the pages of a book. A mannish blazer has a stack of layers curving around the waist. Fountain pen nibs are embedded into delicate silk shirts. Another shirt appears to have reams of paper jutting out from the front. 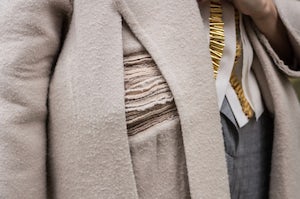 “I was always such a bookworm growing up and I was fascinated by the craft behind bookmaking,” Tai told me. “I went to a bookbinding class and I really wanted to apply the hand-sewing techniques of bookmaking to the way garments were made. It wasn’t until later that I decided to combine my love of books with a nerd persona. But it made total sense — and in a way, this is the result of my own experience in high school and also all my friends. We were all a little bit bookish and shy.”

Tai’s inner geek has also resulted in an intriguing mechanical dress made out of 795 pen nibs mounted on tiny motors. Once switched on, the rows of nibs create a hypnotic shimmer, which can be adjusted for tempo and pattern. It’s a mesmerising sight that could be taken further. “It isn’t likely that I will be creating something electronic for coming seasons,” says Tai. “But I can never veer away from a Japanese gadget store for inspiration. So if it comes naturally I definitely will seize the opportunity.”

It’s always difficult to judge a designer based on a single collection — especially a collection at BA level, which often is a precursor to future, better developed ideas. Tai’s collection is complex, emotive and despite the wearability issues with most of the pieces, I feel Tai has what it takes to build a unique design signature around his love-filled textiles and handcrafted details.

So what would a fully fledged Stephen Tai label entail? “The core vision of the brand would be daywear that is a little bit boyish with a whimsical touch, without it ever being too overtly loud. In terms of signature, I think I will always have a strong focus on textiles.”

An intriguing prospect. Stay tuned for Tai’s new Autumn/Winter 2013-2014 collection, which the designer will show in Paris in a few weeks time.