LONDON, United Kingdom — There are two things to always remember about Italy. Firstly, it was the European cradle of modern thought and creativity. Secondly, it was the last country in Europe to become a unified whole – which, after many years of internecine struggles, happened only 152 years ago. Within those two parameters, all of the Italian cultural complexity of today is to be found. If its faults go very deep, its strengths soar very high – and in no field more convincingly than in fashion.

At the end of World War I, Italy’s status in Europe and the world was not high. It was impoverished and its people were pre-eminently a rural peasant class scratching a subsistence living from the soil. But the Italians are resilient, imaginative and industrious. They soon began to reconstruct their country so that it could hold its head high again. In doing so, they had a great advantage in that there was a rapid changing of attitudes in and toward Italy during the early Fifties. It was the way of life soon to become known as la dolce vita and its elements were irresistible.

Firstly, it was the climate that attracted travel-starved tourists, especially from the United States. Then, it was the fact that Italy was a cheap country where good wine and food were available in even the smallest village trattoria. Thirdly, the influx of high-profile literary figures like Truman Capote and Gore Vidal, who were attracted to the sun, the beaches, the classic sites and ruins, and the ambivalent and accommodating young Italian men who flocked around them.

But the thing that really made people take notice of Italy was Rome and its new-wave cinema which attracted top Hollywood stars such as Ava Gardner, Elizabeth Taylor and Ingrid Bergman to holiday but also to make films at the studio Cinecittà. At the same time, the nubile Italian stars such as Gina Lollobrigida, Sophia Loren and Claudia Cardinale were making waves in Hollywood itself.

All of this built Italian confidence, lent the country cultural cachet, and made Italy a player on the international stage, especially in all aspects of design, from the Vespa to the Olivetti typewriter to knitwear and leather goods – all of world-class standard. Italian design was not only cool; it became a world leader. Add the involvement in high fashion of the Italian aristocracy and upper classes, not only as customers for Rome-based couturiers but also increasingly as creators, and you have the beginning of a fashion system like no other in the world.

Whereas in the Fifties, as now, most of the dress designers in other countries were drawn from the middle class, in the early days of Italian fashion many of the great labels such as Simonetta (Duchess Colonna di Cesaro), Princess Irene Galitzine and Carosa (Princess Giovanna Caracciolo and Countess Angelini Desalle) were owned by aristocrats. Their appeal to American buyers and press powers such as Diana Vreeland was so immense that they and other international fashion figures came in droves to Florence to see the Italian fashion shows held in the Sala Bianca in the Palazzo Pitti. 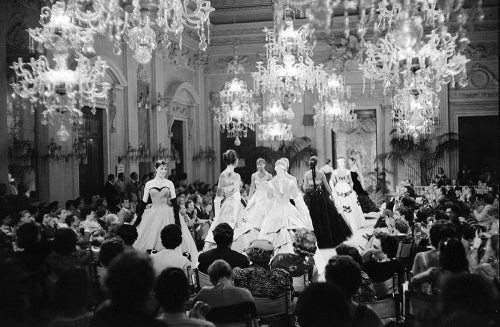 Fashion show at the Sala Bianca | Source: Giorgini Archive via the V&A

Although at the very outset of modern Italian fashion there was a struggle between Milan, Florence and Rome over where Italian fashion should be shown, there was no struggle over where it would be made. Especially in leather accessories, fine silks, rich wools and cashmeres, even today, Italy is the leader. It was Milan that won the prize of being the centre of Italian fashion for the outside world but it was the strong regional traditions and the skilled artisans that made Italian ready-to-wear the driving force it has been for the past fifty years under the quality control banner of ‘Made in Italy’.

As Franca Sozzani, the editor of Vogue Italia, points out, “What makes our country particularly important in the fashion world is not just its peerless combination of creativity, handicraft and product quality but the fact that it is based in one of the most important business and economic centres in the world fashion system.”

As a modern outward-looking city, Milan attracted a different kind of designer, socially and creatively, from those in Rome and Florence. Most Milanese fashion designers came from the professional middle classes, many had close family or social ties to the craftsmen for which Italy is renowned, and very few of them attended a fashion college.  Mariuccia Mandelli, founder of the label Krizia, was originally a primary school teacher; Gianfranco Ferré trained as an architect and Giorgio Armani studied medicine. Gianni Versace learned his craft and honed his skills in his mother’s dressmaking atelier in Reggio Calabria. Only Walter Albini, a man whose name is largely forgotten now despite the fact that in Italian fashion circles he is still unofficially acknowledged as the father of Italian fashion, actually studied fashion design.

This diversity of background and training (which continues with current designers) is what has made Italian fashion so varied compared, for example, with current designers in London and New York, nearly all of whom go to a very small number of art colleges with the predictable result that neither of those two cities currently offer the creative range that Milan did, still does, and will continue to do.

By the mid seventies, Milan was Mecca for fashion professionals. Shows like those of Armani and Versace simply could not be missed, not only for their individual brilliance, but also because of how, in their different ways, they exemplified the strong links with the cultural past only found in Italy. With his flashy boldness, Versace was in a direct line to the showy, extrovert ceiling of the Sistine Chapel, whereas Armani's cool rigour of line is subconsciously following the path of masterly reduction exemplified by the buildings of Palladio. Of course, this connection with the past manifestations of Italian creativity continues today. Miuccia Prada's ostensibly quixotic irrationality is in direct line to the Italian Futurists, just as Dolce & Gabbana frequently go back for 'heartland' inspiration to Sicilian sources, both peasants and fishermen, but also the glamour of aristocratic life.

And it is this cultural, creative and intellectual continuum between past, present and future in Italian fashion that the exhibition “The Glamour of Italian Fashion”, opening this week at the Victoria and Albert Museum, sets out to explore and explain. It may be true that, as Alexandra Shulman, editor of British Vogue says, Milan's fashion scene remains “relatively unchallenged by new kids on the block” at this point, but I personally believe that the quality and variety of Milan will still be there when much of current fashion has been forgotten. At all levels of the industry from artisans to world famous names, there is a pride in the historic culture of Italy that makes anything and everything possible.

When I was working in fashion in Rome, I frequently went to the factories up in the Po valley to speak with knitters. I often took new ideas for techniques, which I presented to the women who ran the shop floors. Black-garbed, very serious, they would listen to my complex ideas in silence, glancing at each other and looking nervous. Then the forewoman would say in the flat voice of finality, “Scusi, dottore, ma non posso.” (“It can’t be done.”) Then it was my turn. “Proviammo, signora.” (“Let’s try.”) Heads were shaken and I left.

At my next visit, the technique I had asked for was not mentioned but, just as I was making to leave, the forewoman would produce a tissue-wrapped sample, which was presented with all the gravity and devotion of the Holy Grail. And, inevitably, despite the earlier protests, it was always beautiful and much more creative than my original idea.

The simple dignity of it always moved me because I knew that the women had not done this to please me or even the famous designer for whom they worked. They did it for the pride they felt in their region. And that is why Italy is different and no matter how huge and corporate the companies become the age-old attitudes will not go. As the old proverb says, what is bred in the bone will come out in the flesh … always and forever in Italy.

The Glamour of Italian Fashion runs from 5 April to 27 July 2014 at the Victoria and Albert Museum, London.