Lucinda Chambers, fashion director of British Vogue, talks to Colin McDowell about growing up on the verge of bankruptcy, meeting Mario Testino, working with Grace Coddington and what goes into making a great fashion image.

LONDON, United Kingdom — “It was a very smart address, even though we were not smart,” recalled Lucinda Chambers, the esteemed fashion director of British Vogue, who lived, for a time, in Cheyne Walk, one of Chelsea’s top addresses, in a flat with a short lease which her mother re-decorated before selling up and moving on. “My mother, who moved us on average every 18 months, only looked at properties on page 58 of the London A-Z, within walking distance of Harrods and Brompton Oratory.”

“My mother was a great maker of things,” she continued. “And when she did up the flats, she did everything herself. She did them up, sold them off and moved on — and that is how we managed to keep more-or-less solvent. But we were always short of money and my mother made my school uniform and I loved making my own clothes. We would go to Harrods (mother with a tape measure in her bag) and try on clothes that we then made for ourselves. We had no patterns, but she had an incredible eye.”

At Hornsey College of Art, Lucinda was surrounded by “brilliant people,” but felt she was not one of them. A self-confessed under-achiever, she found a creative outlet making Perspex jewellery — what she now considers “horrible” earrings and necklaces that she sold at Camden Market. When she left school, she lived in a London squat, worked on the sales floor at Topshop, made clothes for a theatrical company, and grew increasingly drawn to fashion.

“As Mario Testino once said, I looked like a freak and I knew it,” she confessed, recounting how she first met the celebrated photographer with whom she has collaborated closely for many years. “I was living in a squat, which is how Mario and I met. At that time, he had never done a picture, but we started doing tests together. In those days, of course, you never expected to make any money out of pictures. You did it because it was your passion.”

“It was the photography that excited me," she continued, "so I phoned Vogue to see if there were any jobs. I didn’t even know who to ask for, but by sheer luck I was put through to the head of personnel.” Three weeks later, she was offered “the worst job in the building.” But it was a step in the right direction and she took it without hesitation. She became secretary to the woman who was responsible for the magazine’s petty cash payments. “She was very difficult and frequently threw things at me, including pens. At that point, I was making my own clothes and they often began to fall apart by the end of the day. She would shout, ‘You’re not in the fashion department yet my girl!’ For a long time, I didn’t even know who the editor was.” 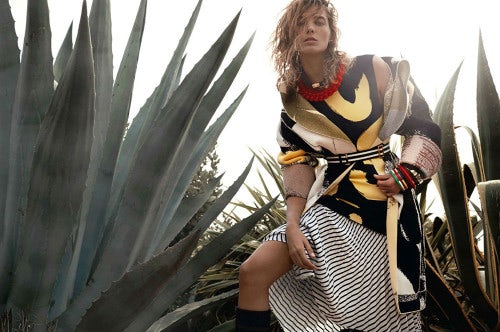 It was the legendary Beatrix Miller who edited British Vogue at the time. She eventually called Lucinda into her office for an interview, which Lucinda recalled vividly. “Miss Miller went out for lunch every day and she interviewed me whilst she was perking up her makeup before leaving. Holding up the mirror to catch the light from the window, she never even looked at me, but she fired off questions... To my amazement, I became her assistant, though she once said in despair, ‘Darling, there is so much in your head, but you are so disorganised.’”

It was true that Lucinda had her own way of doing things. For example, she filed letters from Miss Miller to Lord Snowdon (Antony Charles Robert Armstrong-Jones, an English photographer and filmmaker) under T for Tony, “because that way I could remember them better. But Miss Miller stuck with me which, looking back, I find rather incredible.”

Grace Coddington, then an editor at British Vogue, noticed Lucinda and felt she would make a good fashion assistant. But every time she proposed the idea, Miss Miller would reply crisply, “She’s not ready.” Lucinda is sure the judgement was correct, but fate dealt her a lucky hand. She had worked with Wendy Dagworthy, who offered her a job, and she went to Miss Miller on a Friday afternoon to explain that she was leaving to take the position. By Monday morning, she was Grace Coddington’s assistant.

“I wasn’t ready for it. But then, nobody is ready to be Grace Coddington’s assistant. She’s a total genius. It was an amazing privilege to work with her, but it was very much a baptism of fire. I cried when I was in the fashion department. But in between the tears, Grace taught me everything.”

“What made her truly exciting was that she appeared to have very little formal education, so she came at things with a pure eye and no preconceptions. She would look at, say, an Edward Western monograph, with an absolutely fresh eye unclouded by historical or intellectual baggage. She was a task-master, but even though we were chalk and cheese, I learnt so much. She had a totally organised mind. I had a ragbag mind. She got fed up, I think, and I was shuffled along. I went to the beauty department and that was great, as I was allowed to devise the beauty page and have it more or less photographed as I wished.”

Sally Brampton, who had previously worked at Vogue, was appointed editor of the newly launched Elle (UK) and she offered Lucinda the post of fashion director. When Lucinda went to tell Miss Miller of her decision to leave, she was amazed to hear that Miller was leaving too. Anna Wintour was to take over her job. Any doubts Lucinda might have held about going to Elle were dispelled. As she admits, “I wouldn’t have lasted 5 minutes with Anna….” But when Wintour moved to New York to edit American Vogue, Liz Tilberis took over and invited Lucinda back in the role of fashion editor (current Vogue editor Alexandra Shulman made her fashion director in 1992).

“All my life, I have never thought I was quite ready for anything,” she conceded, “but I knew that it was the shoots that excited me. I like the planning and the teamwork and the page is everything to me. And I know where I am in the world. I have always accepted that there are better people than me out there. I sit very comfortably in the middle," she added. “I am so lucky to work for Vogue. I have the privilege of being on shoots with the world’s very best: Mario Testino, Patrick Demarchelier, Paolo Roversi….” 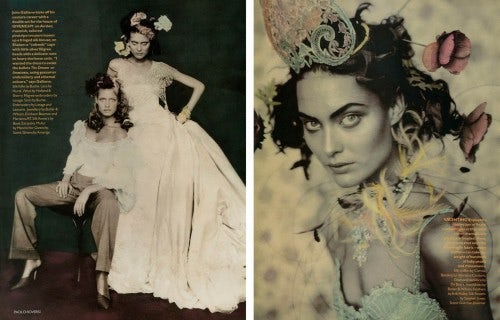 “Grace taught me how to look up and out, but I need to feed my brain as well as my eye and so much of that comes from working with the right people and in the right situation.” Lucinda believes firmly that a crucial part of being creative is being open to others. She recalled an interview she had many years ago with a college tutor who dismissed her with the words, “You're just a Chelsea girl wasting my time.” She found it so mindless and prejudiced to assume that, just because she had a certain address and way of speaking, she could not possibly be serious in her ambitions. It was a formative experience and the lesson she learned has never left her.

“In my job, you have to sell a concept to editor, photographer, set designer and model. You have to convince them enough to take them with you — and that means they must trust you. And you must trust them and never forget you are not dealing with idiots, but with people possibly more imaginative and talented than you are.”

“You must be open to what they say and you must listen. That interplay is the most valuable part of creativity. Without it, the dream in your head never becomes reality.”