LONDON, United Kingdom — At Grace Coddington's 70th birthday celebrations, Anna Wintour, editor of American Vogue, described the legendary stylist as “the heart and soul of the magazine, its guardian at the gate, its beacon of excellence.” Coddington, who is now 75, stepped down from her role as creative director of the title in January to assume the newly established position of creative director at large and pursue a growing number of external projects, many brokered by Great Bowery, Matthew Moneypenny’s super-agency, which now represents her. But she has enjoyed a long and glittering career at the magazine, faithfully captured in her latest book “The American Vogue Years,” which she is here in London to promote when we sit down to chat.

We start with a provocative question: does she agree with the late Isabella Blow, who said that stylists are little more than fashion trolley dollies, carting clothes here and there, and no more important to a fashion shoot than flight attendants are to flying a plane? “Well,” Coddington begins, “there are certainly some very good photographers who seem to believe they are the only ones with ideas. But at every shoot I have ever been on, I believed that everyone was there because they had a role and therefore were important in making the final image. Why else would they be there?” 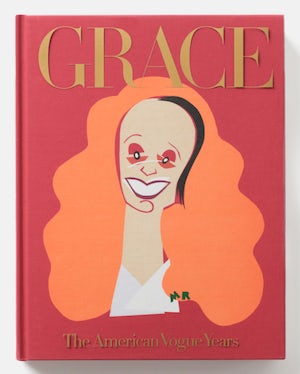 Grace Coddington speaks with authority. After all, she has been in the fashion business since 1959, when, having “escaped” North Wales where her family had a small hotel and taken a course at the Cherry Marshall modelling school in London, she won the Young Idea category of a British Vogue talent contest. The prize included a session with a Vogue photographer. Her modelling career had begun, but it was by no means a meteoric rise. Her advertising rate was £5 per day. Her editorial rate was £2.

It was the very beginning of the Swinging Sixties and Coddington was in exactly the right city and the right job. There were boyfriends aplenty and a lot of fun. Working class boys like the “terrible trio” of David Bailey, Brian Duffy and Terence Donovan were the stars and Coddington knew them well. In fact, she made her name quickly and was soon affectionately nicknamed “The Cod” to match Jean Shrimpton’s “The Shrimp.” She insists she was seen as more of a “character" model than a pretty one, but either way she was doing well — until disaster struck.

Coddington had a terrible accident when a car driven by a boyfriend jumped the traffic lights on a wet night in Eaton Square, hit a delivery van and threw her violently into the rear-view mirror, slicing off her left eyelid. “Luckily they found my eyelashes at the crash scene,” she recalls. Still she was forced to put her modelling career on pause for two years, during which time she underwent five operations to recreate her eyelid.

She later moved to Paris, where she found modelling work and enjoyed a joyous social life, frequenting places like Café de Flore, Brasserie Lipp and La Coupole. But she kept one foot in London and, as she grew nearer to her 30th birthday, she knew her modelling career wouldn’t last forever. “You are too old for modelling. You should be a fashion editor!" advised ex-Vogue editor Clare Rendlesham, who was then the fashion editor of Queen. Not long after, Coddington met British Vogue editor Beatrix Miller and scored a job as a junior fashion editor. "My first work as an editor was with [photographer Norman] Parkinson,” she recalls. “His lessons for me as an editor were invaluable. Because I am English and therefore inclined to be lazy, the great lesson he taught me was that for an editor there was no place for being slapdash. As he used to say, ‘Always be attentive, always be looking for new approaches.’" 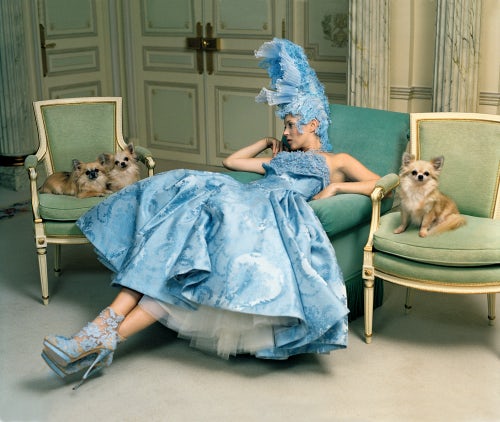 “Of course, in those days we had the luxury of time, so we had the space to develop and expand ideas,” she says. “A location shoot could be as much as three weeks; even a studio shoot could be three or four days. And you might only do one major story a month. Today, everything has to be quick because of the budgets. It’s a really difficult time for magazines now. Competing with things that can be very immediate, like blogs and websites, is almost impossible. A fashion magazine takes between two and three months to create. And the celebrities have worn everything before the magazine is even on the newsstand.”

“'I wish we could go back to small teams,” she continues. “These days, you often don't even have direct relationships with the photographer. There are too many people in between. There are even producers now; and they make a lot of decisions — crucial ones. And the ticking financial clock means it is very hard to change things,” she explains. “In the old days, there was no need to concentrate on merchandise as single-mindedly as today, so we could include vintage. Today, it is all business and everything is about credits, so the creative openness has gone. I realise now, looking back, how privileged we were then to have such crazy freedom.”

I certainly think that everything I have done for American Vogue I have done seriously but not without humour.

But she brightens as she recalls her relationship with the photographer Bruce Weber. “I had a wonderful working relationship with Bruce in the early 1980s and he became a close friend. He taught me so much — about American history, art and its creative aesthetic. Bruce introduced me to the work of early American photographers such as Edward Steichen and Alfred Stieglitz and painters like Andrew Wyeth and Georgia O'Keefe whose work was barely known in England then. Bruce kind of modernised my aesthetic. Before that I looked at paintings: people like Matisse, Sargent or 18th century English portrait painters.” 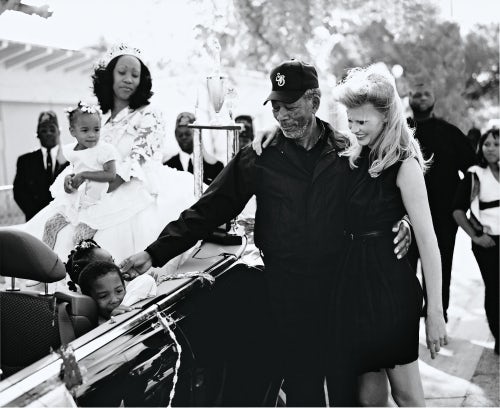 “The pictures with Bruce were exceptional,” she says. “They not only caught the clothes. They caught a place and a lifestyle. He made a wonderful scrapbook for me. The photographs were stuck in with black gaffer tape and there were lots of hand-written quotes. It is probably the most precious object I own. Who has time to do that sort of thing now?”

Coddington was one of the first English journalists to cover the shows in New York. “It was a great time to be doing it,” she remembers. “All the top designers — Ralph, Calvin, Perry Ellis, Halston and Bill Blass — were truly an eye opener because their fashion came from a very different point of view from that in Europe.” By then, she had been at British Vogue for 19 years and when, in 1986, Calvin Klein offered her a job in New York she jumped at the opportunity. “I just sensed this was a time of change and the new creative energy was in New York. And, in any case, Calvin is very persuasive and my boyfriend Didier [Malige] was in New York.”

But she soon realised that Seventh Avenue was not for her. And when her former colleague Anna Wintour was named the new editor of American Vogue, she rang the magazine. Anna came on line and, to her relief, said: “Meet me at Da Silvano at six.” Soon after, Coddington was hired as the creative director of the magazine. It was the start of an exceptionally productive period for both women. But they were both strong-willed and clashes were frequent.

“I certainly think that everything I have done for American Vogue I have done seriously but not without humor,” she reflects. “You have to have fun even if you are working hard. It shows in the pictures and when people open a fashion magazine they don't want to cry; they want to smile. And, although they like to be surprised, they don't want to be shocked or disgusted. I am happy when I see people really looking intensely at a picture, deconstructing the elements. I like to build surprises into my pictures. Not everybody notices but I know they are there.” 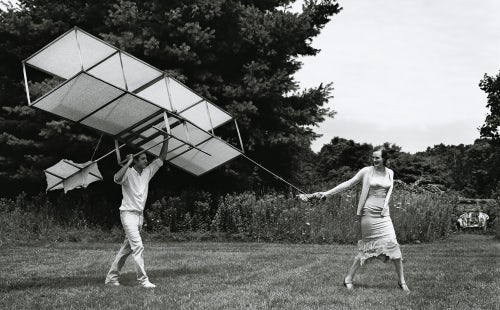 For Coddington, the American Vogue years were a marvelous opportunity to work continuously with the top fashion photographers in the world. And it is amazing how they ‘got’ Coddington, as she did them. Indeed, though she never tried to overtly influence the eye of the photographers she worked with, the pictures always seemed to have her touch as well as theirs, as if she had empowered them in some magical way. Tim Walker’s images of Karen Elson in Blackpool for the June 2003 issue; Arthur Elgort’s images of American suburbanites for the November issue of the same year — they couldn’t be more different, yet more the same. Their intensity reminds me of the great portrait painters, like Francisco Goya or Jean-Auguste-Dominique Ingres. Just as they left nothing to chance, neither did Coddington. And by some God-given alchemy, they tell a story more potently than words could ever do, creating history out of the most banal of situations.

Which brings us to “The September Issue,” the fly-on-the-wall documentary by R.J. Cutler on the making of American Vogue’s September 2007 edition and the vehicle that turned Coddington into a global figure. She fought hard against taking part in the film. “I fought against it for nine months,” she recalls. "But I slowly began to accept the argument that, as creative director, I really couldn't stand aloof. So I agreed. The idea, as I understood it, was that I would be a brief 'slot in.’ But Anna and I were having one of our little tussles over which picture to include in my story and, inevitably, I guess the director immediately saw the dramatic impact that would have. Nothing was said to me and I assumed it would be a brief appearance. So I was surprised to see that in the final version I had been spliced in throughout almost the entire running time.” 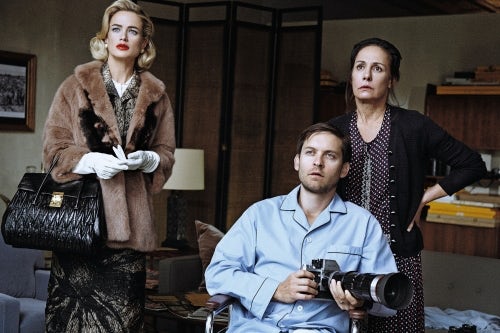 Though Coddington is no longer creative director of American Vogue, she will create four stories a year for the magazine, an arrangement that gives her more time to pursue her other projects, like advertising jobs for the likes of Tiffany & Co. “I’ve come to it rather late. After all, I am 75,” she says. “But I am fascinated by the freelance advertising world, which has some very different imperatives from those of editorial but also some intriguing similarities.”

She has also launched a scent with Comme des Garçons, dubbed simply: Grace by Grace Coddington. “This new phase of my life is extraordinarily interesting. It allows me time to do all sorts of things I have wanted to do for a long time, like my drawings, the books and other projects such as my perfume. It is fabulous because it means that I am learning all sorts of new trades. I have enjoyed every single minute at Vogue, but I could never have done all the things there that I can do now. It’s good for me to sit up and learn new things.”

“Grace,” her revealing and amusing memoir, written with Michael Roberts, is currently circulating in Hollywood. I only hope Meryl Streep’s agent is looking at it. How fascinating for us all if she were to play the two great ladies of American Vogue in the 21st century.

Grace Coddington to Step Down as Creative Director of American Vogue