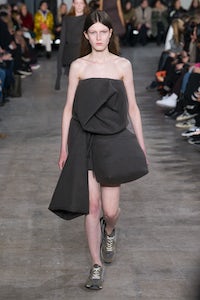 PARIS, France — Rick Owens was smiling, but he was crying inside. “Once I was the voice of hope,” he said. “Now I’m getting more cynical and pessimistic.” His tongue was somewhat in his cheek. You could hardly write off someone so productive as a pessimist. Still, there was no getting round the fact that his new collection was more subdued, more restrained than usual.

It was a sharp contrast with the men’s collection he showed in January, which simmered with fury. He called that one Sisyphus, after the mythical king who was condemned by Zeus for his arrogance to push a boulder up a hill for eternity. Sisyphus became an enduring symbol of frustration and futility. Owens also titled his new women’s collection Sisyphus, but he said the emphasis here was on seduction. “But towards what results?” he mused, suggesting that this was another human endeavour doomed to failure. In a complete departure from the abrasive Owens norm, the soundtrack was a medley of versions of “Baubles, Bangles and Beads”, an enchanting tune from the show “Kismet”. Marlene Dietrich, Peggy Lee and Eydie Gorme were joined by Liza Minnelli, whose presence bothered Owens a little. “She’s a worldly woman singing a song of such wistful yearning.” He wondered if the campness would bring down the wrath of trolls upon his head. (An Owens apercu to take to heart: Camp is a cynic’s excuse to embrace sentimentality.)

As an arch provocateur, Rick now has to worry about such things. He needn’t. Arch his choice of soundtrack may well have seemed, but it also targeted the peculiar dreamy carnality at the heart of the collection (though Owens would typically prefer the unassuming “modest”). The exaggerated shapes – the “voluptuousness and crude sumptuousness” of bulbous bumbags, and coils and bumpers of padding – were his nod and a wink to bustles and panniers. Owens considered those once fashionable addenda to the female silhouette as coquettish references to sex. “When you are exaggerating shapes like that, they are bordering on the ridiculous, so you have to have a sense of humour about them,” he said. “There’s a charm to that.”

Ridiculousness? Humour? Charm? Was this the Rick Owens we know and love talking? “I know it’s very easy for my stuff to come off as very dour and apocalyptic and I am a pessimist but, honestly, I don’t dwell on apocalypse at all.” He certainly laughs easily enough. And there was even an unlikely lyricism to the blanket checks that were such a departure in this collection. Yet that subdued quality I mentioned suggested a new depth of reflection. Last year’s lifetime achievement award from the CFDA and the recent career retrospective in Milan undoubtedly have something to do with it. But there’s something deeper, darker beyond that. This collection was called Sisyphus. Futility. Owens is already thinking of calling his next Babel. Confusion.