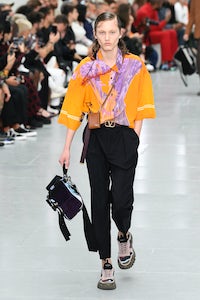 PARIS, France — When Pierpaolo Piccioli summoned up the essence of Roger Dean’s back catalogue as the graphic inspiration for his new collection of Valentino menswear, he was tapping into the hazy fantasies of millions of college kids who would stare for hours at the album covers Dean designed for groups like Yes, Asia and Uriah Heep, mapping out ideal psychedelic destinations for themselves in Dean’s surreal landscapes.

A similar “journey of the mind” was what Piccioli imagined with his collection. No boundaries. “An exotic utopia,” sighed the shownotes. Piccioli was also thinking about the early 20thcentury Italian writer Emilio Salgari, who wrote swashbuckling novels and pioneered sci-fi, describing jungles, forests, amazing places, without ever leaving his kitchen table. The power of the imagination — that’s what Piccioli was appealing to.

It was a lovely idea. Clothes give you the opportunity to transform and transport yourself, and Piccioli certainly gave it a shot with his luminous silk shirts, his tunics embroidered with dragons and beaded with floating islands. The collection was a kind of Wunderkammer, a repository of gorgeous little notions akin to those that aristocratic travellers would attempt to duplicate on their return to Paris from far-off lands in the 19th century. Like the embroidered shirt collars. Or the djellabas and kaftans.

So said Piccioli anyway. Except the footwear was a butch right-now update of Valentino’s nu-classic camo sneakers (good), and the graphics were Roger Dean (not so good). Piccioli admitted that Yes was never a favourite band of his growing up in an era when music fandom was fiercely partisan (and Yes was HUGE in Italy). You could tell from the show soundtrack. Piccioli’s preference for cosmic travelling was Pink Floyd. So if he wasn’t listening to Yes, Deanery wasn’t really a part of his visual lexicon. And right there you could tell why this show lacked conviction.

The best bits had nothing to do with expanding the psyche. Someone had the very artful notion of extending the threads of the top-stitching on denim and chinos to make ethereal fringes. So odd but so pretty. And then there were some very big, very simple shirts that had a lovely, summery nomadic flair. In the showroom, there was also a slew of gorgeous straw hats and caps, which didn’t make it onto the catwalk. So, in the end, there actually was a journey of the mind I fancied taking.