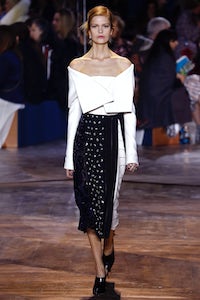 PARIS, France — Whatcha gonna do? Your bright-eyed boy ups and offs, and you have a gigantic business that demands creative direction. Choose a name endorsed by the industry? No time. Look closer to home? There’s a whole studio whose intimacy with the ethos is invaluable. Think about Gucci. A name plucked from the ranks flips the house on its head in a deep and meaningful way. OK, so maybe that was the fantasy that preceded Dior’s couture show today. We knew that it was directed by Serge Ruffieux and Lucie Meier, studio directors at Dior. So were they going to extrapolate or were they going to revolutionise?

Who doesn’t love that kind of anticipation in a fashion show? The first outfit’s portrait neckline and bifurcated skirt said that, at the very least, Simons’ questioning approach to couture wasn’t about to disappear. Then something strange happened. The dissection of feminine dress codes that followed suggested not Dior, but Prada. That was an issue in a couture collection. The guipure lace, the slouchy necklines, the clashing contracts of pattern and texture made pretty pictures for Dior, but they felt familiar. Amanda Murphy opened Prada’s show for Fall 2013 spectacularly, in a dress that slid sideways. Here she was again, same mood.

What stood out in a collection that will ultimately be a selling tool for the world’s most well-heeled women was how raw it was. The show notes insisted that this was one way to draw couture into the everyday. You can hardly refute that reality, at least as it was shown on the catwalk. The Bar, for instance, shapely stalwart of the Dior legend, here, unbuttoned, flying loose. It looked so attractive that way that you were thinking Ruffieux and Meier did good.

Then the designers made their models pop out of flounced skirts, like multi-coloured stamens, and once again you were wondering about Prada. But the flounce was the collection’s leitmotif. It was responsible for the Blanche DuBois vintage drama of flippy pleated dresses, and the handfuls of pleats that Blanche pulled out of her trunk.

The world was probably waiting for Meier and Ruffieux to fall flat on their faces. The average Joe isn’t partial to the triumph of others. So he’d have been happy here. No triumph. But the vintage, unfinished, tucked and draped mood of the collection drew maps for the future, if there is allowed to be one. Couture needs to court a younger clientele. It’s a massive tease to imagine them responding to these clothes. 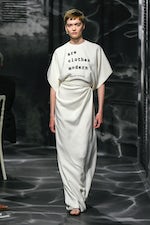 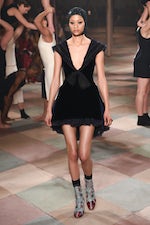 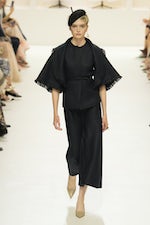 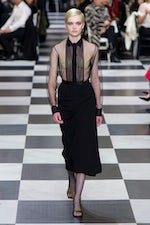