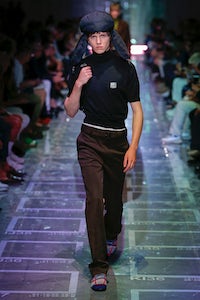 MILAN, Italy — After her show on Sunday night, Miuccia Prada insisted she prefers the most basic, banal words to describe what she does. No fancy-schmancy intellectualising. Just words like “simple” or “sexy” or “raw." The Prada twist is, of course, that nothing is ever really simple.

For Miuccia’s dream of “normal that looks exciting” to come true, you have to have normal to begin with. Maybe that’s why she built her new collection on blazers and coats, classic in camel and grey flannel, less so in suede and chambray. Then she was able to frost the familiar with a layer of what could pass for excitement. It was most obvious in a psychedelic subtext, a bit of flower power, a sensational mélange of found imagery on Paul Hameline’s turtleneck (rumour had it that Miuccia herself had mixed up this psych stew).

So there was actually SEX in the show. Frederic Sanchez’s soundtrack played Air’s “Sexy Boy” as the models made their final march. It illuminated the curious challenge in this strange brew. Miuccia claimed that she was ultimately after “a new elegance”, something that honoured sport and street (so many grabby, sporty bits and pieces in the collection, anchored by fabulous footwear) while also transcending them.

Reflect on the way she’s covered menswear in the past and you’ll get a pretty clear idea of how she feels about the male of the species. She does like to deball him, emphasise the vulnerability rather than the masculinity. And why on earth not? Toxic testosterone is paving the ghastly cul-de-sac into which human civilisation is veering. So Miuccia’s response — not for the first time — was to play up a man’s feminine side: a ruffle, a purse, and always those "sexy" shorts.

It was also tantalising to imagine the huge trapper hats that accessorised almost every look as some sly acknowledgement of the creeping Putin effect on the West. Miuccia’s political sensibility was, after all, shaped in the crucible of Communist activism in 1970’s Milan. Unfortunately for that theory, those hats had already dressed up the New York show, where they were inspired by an image of a Galliano look once sported by Kate Moss. In this latest incarnation, Miuccia said she liked the impression the trapper hat created of a huge head tottering on a skinny male body. (OK, that’s vulnerable-ish.)

And so to the set: raw concrete walls draped in sheets of translucent plastic, seating made up of inflatable plastic cubes, originally designed by Verner Panton in the early 1960s but only now produced for sale. An intangible environment, scarcely helped by the geographic coordinates printed on the floor. Apparently, they were for “remote places." We were not to know where we were. And I’m not sure that Miuccia knew either.