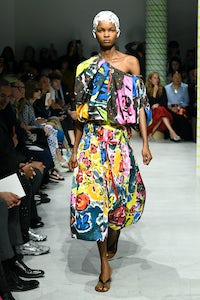 MILAN, Italy — Francesco Risso showed his new Marni collection on the same day as the Global Climate Strike. His show was his own protest, a riot of beauty informed by Risso’s experience in the Amazon six months ago. Energy, urgency, rawness and primal flora made the Marni models into Dryads of the rainforest.

It started for Risso with a holiday in Brazil six months ago. He became friendly with Bela Gil, the daughter of Gilberto Gil who, with Caetano Veloso, was one of the instigators of the Tropicalismo movement in the 60s, which used music, poetry and theatre to resist Brazil’s military dictatorship. “They were singing with joy but they were incredibly political,” Risso said admiringly. He felt it.

There was already a spirit of revolution in the menswear he showed in June (Che Guevara and Capote to a disco beat). Since then, Risso has wept as he watched the Amazon burn, and a new urgency has gripped him. Out tumbled the words, “Our soldiers are our plants, our flowers, women are becoming bulbs, becoming trees, hugging trees.” His models walked with heads caked in clay, twigs, leaves and flowers. They were dressed in relics of clothing — picture a trunk of shipwrecked eveningwear, with a smaller suitcase containing more prosaic but equally damaged items, like a jean jacket and a sweater — dissected, re-constructed with drapes and knots, moulded and elasticated to the body.

The effect was a little like the female figures on a Classical Greek frieze or maybe the Merveilleuses, the party girls of post-Revolution Paris in the 18thcentury. The decoration was a Fauvist fury of hand-painting and swathes of naïve beaded florals. Recollecting Marni’s facility with skins were huge leather coats which, on close inspection, were minutely embossed. That detail was almost invisible under the splashes of paint but it enhanced the notion of clothes joyously repurposed from other lives, even other dimensions. May the circle of style be unbroken.

His years in the luxury industry have given Risso an instinct for what gives clothes value. Make something so special you never want to be without it. But what he is attempting at Marni is difficult. It is on the same wavelength as Rei Kawakubo or Junya Watanabe’s most challenging moments. (That was, in fact, a caveat heard after the show.) And Risso knows it.

His typically surreal show notes exalted the effects of a fantasy drug called Tachitropirina (active ingredient Psychedelissima), one of whose “desired effects” included “acute manifestations of tree-hugging.” Something to break down hidebound preconceptions, to free minds so bodies would follow: Risso would love that. Because the wild beauty in this collection was special. The pagan simplicity of a sarong casually knotted from a length of cyclamen duchesse satin, matched with a top in rich marigold satin, and a pair of flipflops? The message it sent was that luxury can be redefined for the revolution.