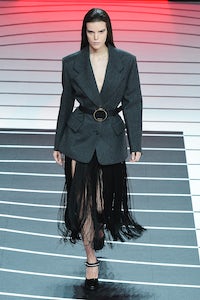 MILAN, Italy — Miuccia Prada’s fall collection for men is often a precursor to the clothes she shows for women a month later, but if her most recent menswear could be read as a celebration of the everyday hero – extracting a germ of humanist optimism from these darkling times – the women’s collection she showed on Thursday was something else altogether. The bones of the staging were similar, an arena carved out of the basement of a building at the Fondazione Prada. But the men’s show echoed a shadowy piazza from surrealist Giorgio de Chirico’s repertoire, while the women’s drew on the linear headiness of the Vienna Secession at the turn of the 20th century. “A moment when artists and intellectuals and workers came together to create something good,” explained Miuccia. Also, a moment when Sigmund Freud’s theories were about to unpick the foundations of human consciousness.

So there was an appropriately fierce intellectualism in Prada’s presentation, at first a collar-and-tie sobriety, then a subtle visual extravagance that ended in opium den silk pajamas. Maybe it was the moment when the 19th century turned into the 20th that was her interest, but that era seeded everything, good and evil, that came after (Hitler was attempting to activate a career as an artist in Vienna around the same time) and the power of the collection lay in its exaltation of women as rebels, as fighters. It’s all coming to pass again, isn’t it?

Perhaps that’s why the glass of fashion has been engaged in reflecting a century ago, the Twenties, roaring again with all that earlier decade's attendant joys and terrors. Miuccia Prada has always been ahead of the game. Perhaps it’s too glib to note that she seemed to be already embedded in the 30s, in the proportions of her skirts and belted jackets at least. Those jackets, and the coats that complemented them, were the collection’s simple, strong backbone. The female complexity, said Miuccia, came from the decorative elements, the jet and silk fringing that was everywhere, the sheer dresses, the obvious tokens of the feminine. “A cliché of delicacy”, Miuccia called them.

She acknowledged that “everything is difficult” in this transitional moment in history, but she was insistent that her feminine clichés were “not an accessory for a stupid moment”. She added, “It’s something that is relevant in general.” Because anything that falls under the bailiwick of womanhood needs to be protected in the death throes of Old-White-Man culture.

In many ways, it did feel like ground that Prada has covered before. Taking clichés, owning them, reconceptualising them – that’s Miuccia’s superpower. Here, she weaponised glamour, a word that would usually make her gag. There was something particularly high octane, exaggerated, about the collection. The models walked extraordinarily tall, their hair was as sleek and looooooong as their skirts, their shoes and bags offered a whole panoply of power accessorised (and quite gorgeous with it). Frederic Sanchez supplied a soundtrack of disco, with an emphasis on Giorgio Moroder’s finest moments. Something about that music, these clothes reminded me of the tv show “Berlin Babylon,” with Bryan Ferry crooning old Roxy Music songs in a Weimar nightclub. Incongruous updates, proving only that nothing ever really changes.