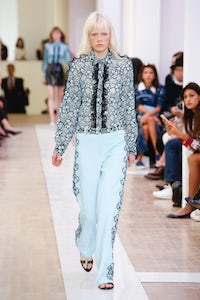 40 View Collection
Fashion Week
Share
Comment
By Tim Blanks October 26, 2015 10:31
Share
Comment
By Tim Blanks October 26, 2015 10:31
PARIS, France — The house of Emanuel Ungaro has so far resisted the kind of magical revival that an entrepreneurial owner might hope would come with the infusion of creative vigour from a hot new kid in town. Fausto Puglisi would probably say “Basta!” to that. He’s already carved a niche for himself as one of Milan’s names to watch, and he’d say it’ll only take a little time — and patience — before his contribution to Ungaro in Paris makes a similar impression there. Magical revival? Well, at least a reason for the house to live on.
Puglisi made a smart move for Spring. He harked back to the very beginning, to that moment in the late 1960s when Ungaro launched his own house after time served with Cristobal Balenciaga and Courreges. Puglisi found a purity and a playfulness in those early collections. Not the ramped-up sex of the ruched floral georgettes that would make Ungaro an exemplar of fashion maximalism in the 1980s, but the dolly-bird sweetness of the macramé lace that Forster Willi made for Emanuel in 1968-69. “It’s young,” said Puglisi. “No charmeuse, no georgette.” Instead, he mixed the lace with raffia, organza, cotton and silk in swingy, short silhouettes, textured with three-dimensional daisies. Cropped capes, thigh boots and a synthetic palette of pink and turquoise on a white background with black vinyl accents amplified the 1960s connotations, but, given Puglisi’s passion for dance music, you could also read all that as a healthy injection of Deee-Lite’s Daisy Age groove.
And he personalised Ungaro too, by adding a layer of the strappy-topped bondage that characterises his own collection. Except that here, Puglisi insisted it was romantic, rather than sexual. He has to give himself room to grow into Ungaro, after all. 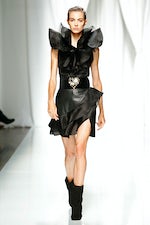