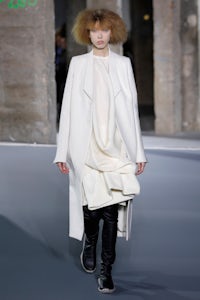 PARIS, France — “I wanted the clothes to look like they were evaporating,” said Rick Owens of his new collection. “Mohair evaporating into the air, the hair like chrysalis cocoon things melting into the ether.” He was trying to convey the idea of the eternal continuum, the energy that was there before us and will be there after us, manifesting for a brief moment as matter. Us.

“It’s reassuring that I’m not going to die, that I’m going to become part of everything and everything is a part of me,” Owens continued. Of course he’s scared of death, he admitted, but he wanted to offer an ideal point of view. “We’re all human. We can look at ideas and point ourselves in that direction and hope to capture that mood.”

And that’s what his majestic show attempted. It was called Mastodon, like his men’s presentation in January. Implicit in that was the idea of extinction, the dystopian consequence of change. And yet the vision offered by the show was, in a prime Owens paradox, practically utopian, with its ethereal softness, its organic colour palette of whites, browns, greens and oranges, and its “graceful acceptance of change”, as the designer dubbed it.

“I shut myself in my studio and draped every single piece personally. My handwriting is all over these clothes. That’s what I’m sending out as a poetic gesture.”

The clothes were caught in the primal act of becoming. One coat featured an embroidery of ooze (“cupcake frosting” the fulsome shownotes called it), an aestheticised version of the tar pit sludge that Owens dribbled over his men’s collection. Dresses were trailed in coiling masses of mohair, the melting he spoke of. Mutant cargo pants had legs the width of a mastodon’s. They were paired for the last look with a bolero made of leather scales. How often does an Owens outfit look like a new life form?

Changes in the natural world were clearly on Owens’s mind. But, as he accepted that multiple forms of life have risen and fallen in Planet Earth’s life span, he was less reconciled to the changes the fashion industry currently faces. “This is my personal response, the only thing I can contribute,” he said. “I shut myself in my studio and draped every single piece personally. My handwriting is all over these clothes. That’s what I’m sending out as a poetic gesture.” His implication was obvious: there is no poetry in the straight-to-customer farrago that is currently tying the industry up in knots. 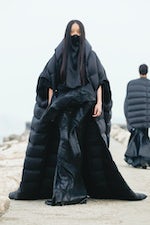 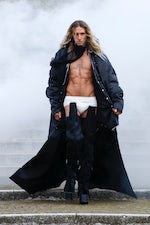 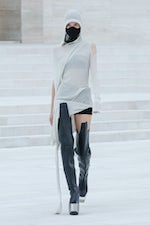 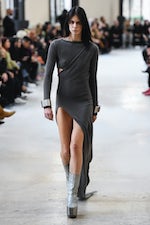