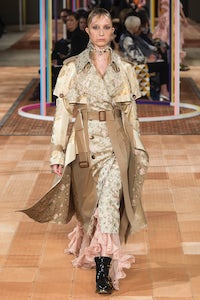 PARIS, France — On a beautiful day in June, surely one of the only ones in the blighted English summer, Sarah Burton and her team visited the famous garden of Great Dixter, where Nature impressed itself on them with her joyous celebration of colour and shape and life. The day trip left Burton with a yen to break out. “I felt I’d been long and lean for a while, I wanted to explode the shapes, slice up objects that looked familiar and take them somewhere else.”

So that was the starting point, but this was McQueen country and it didn’t take long for the familiar — a trench coat, a Barbour, a man’s checked shirt, a nightie, a tuxedo jacket — to be absorbed and co-opted by Burton into the instinctive otherness of her world. That tuxedo, for instance, crushed together with the evening dress that may have entered a room on its arm in another dimension. Burton specializes in such eerie dislocations. Elsewhere, she threw together scraps of Victoriana and Edwardiana she’d accumulated, remade them in silk and taffeta and trailed them over a pair of black pants, creating a Miss Havisham for the 21st century.

I was looking for the garden. She said the girls were flowers. Some of them wore tulle covered with flowers which changed position as the models walked. Others looked like blossoms crushed. Backstage before the show, there were seven! people working on one dress, fluffing an explosion of red glass organza into being (Burton said it was actually nylon, but she preferred the other description.) And there was one full-skirted look based on scraps of floral needlepoint remade in paper, and embroidered on top. Paper!

Burton has trafficked in female paganism for the past few seasons. A garden suggests cultivation, nature tamed, but she was determined to shake that preconception. Clothes were ripped apart, stitched back together. And there was a fundamental toughness in the leathers and knitwear disrupted by zips, all anchored by chunky punk boots. Even the last few dresses, the flower-strewn tulles, were dragged and pinned sideways. And Burton’s models were water-drenched, weather-beaten. It was a very particular vision of women she offered, wild, but grounded in the earth, romantic but real.

On a day when the news from America was even worse than usual, Burton talked about meeting a scientist from Kew Gardens who told her that women have traditionally always been able to locate healing plants, while men, on the other hand, knew exactly where to look for poisons. Surely that’s because Mother Nature knows best.