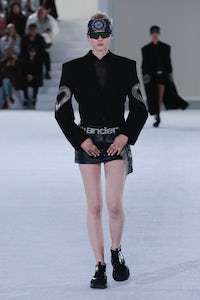 NEW YORK, United States — Sunday night was the first time Alexander Wang’s father has ever attended one of his runway shows. Mr. Wang dutifully represented in head-to-toe AW merch: a white bucket hat, t-shirt and pull-on pants stamped all over with his son’s name, rendered in a range of typography inspired by iconic New York institutions. Wang himself also wore basketball shorts in the print, a big ol’ “Made in China” tag attached deliberately to the front.

His parents’ move from China to the US in 1972, which he quizzed them about during a recent family trip to their homeland, was the starting point of Wang’s latest collection, shown on the rooftop of a building downtown shortly after sunset (and right before a downpour).

The narrative in Wang’s head of “immigrant Americana” manifested itself through pop-culture references from his own 1980s childhood: rock-and-roll, American football, heavy metal. To set the scene, Metallica and Limp Bizkit were blasted through the speakers, with stadium football lights illuminating the white-carpeted floor.

Cable-knit sweaters woven with chain links, ripped-up diaper jeans shorts, biker belts sewn together into mini-skirts: This was certainly not unchartered territory for Wang, although the collection felt more considered than other recent efforts. Axl Rose bandanas and chain metal bra tops mingled with Chinoiserie-detailed blouses, leather leis and pointy pumps spiked with not just one stud shape, but what looked like dozens.

The extra attention to detail was no coincidence. There’s a lot riding on this collection, both critically and commercially. Wang has been vocal about wanting to strengthen the bond between his brand and his consumer and has made a bold shift away from the traditional fashion calendar, aligning his most elaborate marketing event with the pre-collection season when buyers place the biggest orders. (Wang’s Sunday night show was meant to kick off a “new” New York Fashion Week, although only a few designers, including Rosie Assoulin and Narciso Rodriguez, are following his lead.) Collection 1, as he’s calling it, will arrive in stores in October.

Did Wang drum up enough excitement, both with the top customers he invited and the industry cohort of editors and buyers, to make it all worthwhile? To get everyone in the mood, he sold souvenir merch at the front and doled out “Wang dogs” and rain ponchos for those warming the bleachers. The comedian Sandra Bernhardt ran around with a video crew as the host of “Wang TV,” which was broadcast on Alexanderwang.com.

Fashion-as-entertainment is not a new concept, but it’s one that Wang is betting heavily on. (Last October, he hired former tv exec Lisa Gersh to be his chief executive.) But as his army of models walked out to Childish Gambino’s “This is America,” a song destined for runway show soundtrack ubiquity, the effort as a whole ended up feeling pretty mild.

To be fair, some of that can be blamed on the sleepy Sunday night time slot, but not everything. When it comes to the youth vote, Wang has more competition than he used to from luxury brands taking inspiration from a drop-driven streetwear model that relies on compelling individual pieces of product, rather than a playful concept, to woo consumers.

But he was smart to abandon the traditional calendar; it makes absolutely no sense, especially for brands shifting more of their business towards direct-to-consumer. Now, he’s got to figure out a way for it all to feel a little more must-buy.