Polish and Homage at Off-White 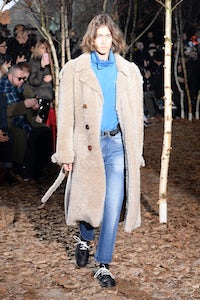 Polish and Homage at Off-White

PARIS, France — Beneath the brutal columns of UNESCO's Paris HQ, Off White's Virgil Abloh imagined an autumnal forest setting strewn with dead leaves that merged into the clothing he showed for his latest outing entitled ‘Seeing Things’, by way of gilded leaf jewelry by London jeweller Duffy. Duffy's was only one of the names that added value to this polished outing: the late art critic John Berger was another (his voice opened the show with intellectual art musings) and Raf Simons was surely a third, though only present in Abloh’s unerring sense of homage. The latter arrived via photo-print parkas, pooling corduroy trews, and a somewhat empty sense of the profound that echoed across his giant mohair picture sweaters and collaged graphic transfers. Out of those, the hand and eye creeping out of a triangle felt the most seductive: it held just the kind of dystopian Clockwork Orange appeal that makes Abloh’s references so relevant right now.