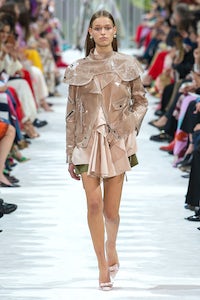 PARIS, France —  Pierpaolo Piccioli said he wanted “to make the ordinary extraordinary” with his new collection for Valentino. He’s not the only designer this season to transmogrify basics with all the mastery of a high fashion atelier. But to see Valentino rebuilt from the ground up on an oh-so-ordinary tank top and a pair of cargo shorts was invigorating.

Piccioli’s injection of high-performance sportswear into the Valentino vocabulary made his men’s presentation in June one of the best of the season. His women’s show on Sunday night lacked June’s intense focus, but the halo effect of the earlier collection’s sportiness lingered. If the finale concluded with a predictable sequence of the pure, flowing dresses — often sheer, shining with sequins, clotted with embroidered flowers — that have reaffirmed Valentino’s reputation as the last refuge of haute romance, those gowns packed a punch when they turned to reveal that they were suspended from racer backs. The effect was especially striking with Vittoria Ceretti’s dress, alive with embroidered plants and silvery fantastical wildlife, quilted with flowers, but, from the waist up at least, virtually gym-ready. The ribbed trim on the neckline was borrowed from diving suits, probably the first such symbiosis in the annals of high fashion eveningwear.

For a change, however, it wasn’t the eveningwear that lingered in the mind after the show. Piccioli’s attention to “ordinary” sportswear yielded some lovely, now-ish clothes, with an alluring overlay of his own arcane inspirations. It can’t hurt to mention them. "Orlando Furioso", an epic poem from the 16th century, in which Orlando loses his mind for love and his best friend has to fly to the moon to recover his sanity (I’ll be reading that this weekend right after I see the new "Bladerunner").... The Apollo 8 mission....Piero Tosi’s costumes for the Federico Fellini segment of the 1968 movie "Spirits of the Dead". If that all sounds LALA GONE GAGA, Piccioli actually borrowed directly from Tosi to create a biker in plastic, lined in chiffon, trimmed in sequins. It followed on the heels of a gloriously dissected parka – one of several – layered over shorts in a leather as miraculously soft as poplin.

As for Orlando’s best friend, and the Apollo astronauts, they were called into service to reinforce Piccioli’s feeling for the necessity of finding new perspectives on the familiar, on the ingrained ways of doing things. “Being aware is not enough,” he said. And he wasn’t only talking about fashion.