The designer has always been able to create alternative fashion universes that are utterly convincing in their exquisitely researched detail. But this latest effort was particularly so. 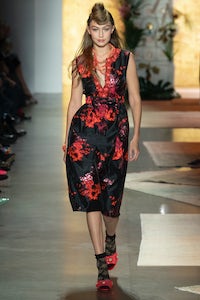 The designer has always been able to create alternative fashion universes that are utterly convincing in their exquisitely researched detail. But this latest effort was particularly so.

NEW YORK, United States — It’s not the first time this week that “wanderlust” was invoked as the genesis of a collection but where Tory Burch referenced the Mediterranean peregrinations of her parents, Anna Sui had more fantastic escapes in mind: Shangri-La, Bali Hai, Avalon, the Garden of Allah, and other dreamy idylls of legend.

“Everything I’ve been fascinated by lately is very transporting,” Sui said during a preview. Like many others, she's been craving a temporary reprieve from the frantic, frustrating and oppressive news cycle.

It’s Sui’s genius that she has always been able to create alternative fashion universes that are utterly convincing in their exquisitely researched detail. But this latest effort was particularly so. Just listen to her running through a compendium of inspirations: the tiles in the Avalon casino in Catalina; a Polynesian mural from a spread in the magazine World of Interiors; the shell-covered walls of the cottage Marianne Faithfull borrowed in County Kildare, Ireland; 19th century sailor art; but, most of all, the legendary Tony Duquette's designs for the 1955 film “Kismet”.

Sui had set designer Jerry Schwartz recreate Duquette’s bazaar, the backdrop for the hit song “Baubles, Bangles and Beads” from the movie, and she invited her audience to arrive early and shop in kiosks set up by a handful of her favourite vendors. Just like a real bazaar.

Of course, all this inspiration and effort would only be so much shallow window-dressing if Sui couldn’t deliver the goods. But her new collection was a seductive mash-up of old Hollywood decadence and glamorous streetstyle. Kind of like the Black Dahlia at a Travis Scott show. Glittering turbans and bucket hats. Black devoré jackets and brocade fishermen’s vests. Platform shoes (and socks) and sequinned sneakers (with a mermaid motif).

Dilone brought it all together in a full-length, slit-to-the-thigh, back-bowed brocaded sundress (with bucket hat and sneakers) that was an irresistible combination of the casual and the dressy. And Frederic Sanchez’s soundtrack was a brilliant hallucinatory counterpoint, ragtime interspersed with songs from Bowie’s Berlin period.

Accentuate the unpredictable: that was Sui’s battlecry. She stuck a bazaar on her catwalk because she was asking herself, “How do you make retail interesting?” The collection was full of similar twists on the familiar: a motocross jacket with a huge embroidered pineapple, lace trims that, on closer examination, were lovebirds and palm trees, Bulgari jewels recreated in shells.

For a world looking for escape, there were tickets galore. And Anna Sui is one travel agent you can trust.