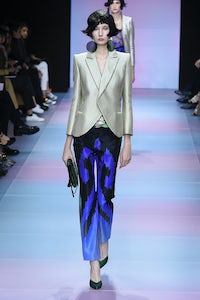 PARIS, France — King of the red carpet! Or, at the very least, the man who launched the whole notion of a designer and a celebrity making an umbilical connection to mutually exalt their glory. And just think that it all began with Wanda McDaniels running home to grab a pair of her own earrings so Michelle Pfeiffer could accessorise her Armani gown in 1989. Such prelapsarian times!

The curse of that halo-ed origin story is that it is difficult to divorce an Armani Privé collection from its genesis in the demands of award-show dressiness in Hollywood. There are times when Armani feels entirely true to his sensible soul, able to reconcile his own innate inclination towards monochrome restraint with the showiness of show business. And then, inevitably, there are other times when he surrenders to the fabulosity of the starry world that has embraced him. And why shouldn’t he? Movies saved him when he was growing up. And here was Reese Witherspoon in his front row, scouting a frock for the Academy Awards.

But the show notes for Armani’s new collection spoke encouragingly of ikat, the dyeing technique most prevalent across India, Japan and Indonesia. It produces a rich, blurry effect that speaks of the efforts of the human hand and the glory of imperfection, and that sounded like a promising launchpad for his show. Sadly, it wasn’t to be. Armani has an irritating propensity for rendering his models uniform. Maybe this is a gambit to thrust the spotlight on the clothes, but please don’t do it with a bobbed black wig and a lacquered skullcap. Who was that woman we were watching? Amelie? 21st-century French gamine?

The kicky little jackets and trim track pants that ruled the opening of the show certainly suggested something like that: narrow silhouette, ¾ sleeves, kitten heels. The gamine was elevated with beading and fringing, and the luxury was defined by a bead-trimmed black croc jacket with an ikat skirt. But that outfit was a stark reminder that ikat is a labour-intensive endeavour which has an almost sacred connotation.

It was long ago established that it is navy blue, not greige, that is Armani’s comfort zone. Here, he was seduced by sapphire. Seduced as in a strapless silk gown that coiled around the body like a snake. There were many other variants of sapphire gowns in the collection, but it was a teasing notion that he had to restore his faith with one single white outfit. Pure as the driven slush, it closed the show.

Editor’s Note: This article was corrected on January 27, 2020. A previous version of this article stated Renée Zellweger was in the front row of the Armani Privé show. That is incorrect. It was Reese Witherspoon.