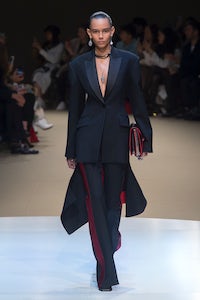 PARIS, France — Sometimes, Sarah Burton would get lost in McQueen, snared in detail, which, however sumptuous, distracted her so she couldn’t see the forest for the trees. And then there were those other times when the attention to detail, the breadth of vision, and the grasp of the mood of the moment combined to create an explosion, a fashion force of nature. So it was with Burton’s show on Monday night.

She actually used the word "explode" to describe the extremity of the collection: nature exploded, like a monarch butterfly bursting forth from its chrysalis. That combination of fragility and strength infused Burton’s work. One extraordinary look among many was a coat of shredded jacquard, the patterns of a monarch’s wings folded protectively around the model. Metamorphosis! Burton was thinking of the unleashed power of womanhood. You could see it in the shoulders, broad but softer than usual. Quietly confident.

The inspiration of the collection was critical. Shooting the spring ad campaign in Brazil with Kenyan model Shanelle Nyasiase, Burton was overwhelmed by Nyasiase’s power against a backdrop of “epic nature”, big plants, bigger bugs. “An earth mother in a more hyperreal way,” she called her. The notion of a new kind of emergent femininity was manifest in a quilted jacket in green leather, its collar peeling back like an opening cocoon, a spectacular image of becoming. Also a little macabre, fitting the McQueen ethos. Throughout the collection, butterfly wings were evoked: pink silk sleeve extensions, the huge red bow covering the spine of a black blazer, the tails of a black coat slashed open, its interior a satanic red.

And once you had that notion in your head, the anarchic relationship between red and black ruled the show: Stella Tennant in a black military coat with a single stripe of red, Tasha Tilberg wrapped in a black blanket, this time two stripes. Then there was the imperial monarch, the fiery orange and glossy black of its wings inspiring intense kaleidoscopic patterning, and the jewel-like scarab beetle, reproduced hundreds of times in the decoration on a chiffon sheath.

One of Burton’s own favourite looks was a green canvas jacket and pants with a military rigour. Raw denim. It would last forever. Not like the pieces woven from silk fringing. The black dress with the red bird of paradise, its tail dissolving in a torrent of silk threads, might hold up. But you could feel the vulnerability of the fringed dresses on Rianne van Rompaey and Liya Kebede, how easy it would be to snag threads. “Maybe that’s beauty,” Burton mused. “Butterflies break wings.”

Say it again: strength and fragility. The struggle is real.