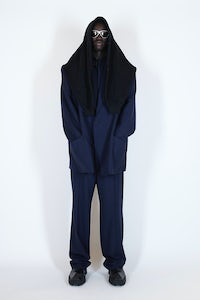 PARIS, France — It was 10.30 on a rainy Sunday morning in London, but on YouTube, it was midnight in Paris, and Demna Gvasalia’s small platoon of Balenciagettes was marching determinedly down the boulevards and past the landmarks that provide the backdrop for a “normal” fashion week. But what’s normal now? Gvasalia acknowledged as much with a sweatshirt which read “Paris Fashion Week” in pixilated type, like a signal that wasn’t coming through so well. On the soundtrack of the film that Walter Stern directed for the brand, BFRND intoned a stentorian version of Corey Hart’s “Sunglasses at Night” (be still my Hart). Gvasalia’s men and women sported human fly-eye glasses to match, an intense reminder that you don’t masquerade with the guy in shades.

The collection on show was labelled “Pre-collection Summer 2021,” the first implementation of a new calendar for Balenciaga that Gvasalia laid out in a recent interview with WWD. From now on, he will do one physical presentation per year to show his couture collection for both men and women, and the timing of the brand’s pre-collections and main collections will be flipped, although Gvasalia claims it’s too soon to say in what form they’ll meet the world.

Pre-collections have traditionally been the preserve of a brand’s more commercial offerings, the looks with legs to last a while on a shop floor. Gvasalia refreshed the style that defines his Balenciaga, the fusion of sport, street and seriously shouldered salon. The track jacket with the quilted MA-1 lining was one striking example. Another was the trompe l’oeil jacket and jeans that looked like stonewashed denim but were actually leather. I hear the odd voice saying “So what?” (especially when the aesthetics of stonewashed denim are an acquired taste anyway) but a look like that actually pointed to the seriousness of purpose that underpinned this collection. Maybe it was something honed in Gvasalia by months of lockdown: dark thoughts about a world turning inwards transmogrified into cautious optimism about a world waking up. So there were all these interior ideas (pajamas, bathrobe, slippers) reconfigured for outside. But there was much more to his response than that.

The press release pitched his tent: 93.5 percent of the plain materials in the collection were certified sustainable or upcycled. It was easy to see that in the basic tops, pants, coats, or in the patchwork pieces collaged from deadstock leather goods, but the most “glamorous” pieces in the collection were equally defined by the principle: a slip dress made from a mesh of metal links, a pagoda-shouldered “fur” coat shaggy with shoelaces (harking back to Gvasalia’s formative years at Maison Martin Margiela), or a slinky sheer gown woven from basketball net chains. (The PR claimed lineage from a couture look that Cristóbal Balenciaga spun from fishermen’s nets.)

Sustainability was also the motivator behind a more conceptual goal: making banality so interesting through texture or technique that you never feel compelled to replace it. Clothes that are keepers make the most sustainable fashion of all. I’m sure that is an idea Gvasalia will explore at much greater length and depth in his first couture collection, due in June 2021.

Here, there was the novel notion that the artful, deliberately threadbare effect on some pieces (a bias-cut evening dress, a hoodie) reflected the fact that they had been so loved that their wearer could never throw them away. I think there are more people who could relate to that than you might imagine, though there was, of course, a deep fashion irony in Gvasalia giving you the opportunity to purchase a personal history. (Ralph Lauren has made billions out of exactly that notion.)

Deeply ironic is a default position for Gvasalia. His eyes have seen too much in his 39 years. There is always a nagging something that hints at clothes designed for humans made nomadic by rapid, unprecedented changes in circumstance, when you might have to leave where you are with your world on your back. The Balenciaga film on YouTube concluded with a lengthy list of the official guidelines under which it was produced, to underscore that its makers had followed the new rules. It’s something we all have to do now, however we feel about following rules. Maybe Gvasalia was acknowledging this shift in reality when he applied a big yellow happy face to a sweatshirt. Summer of Love 2021? No! The smile was melting into a grimace.