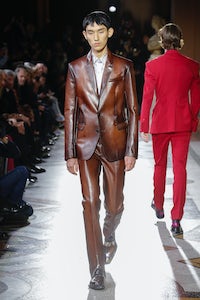 PARIS, France — Do houses still have intrinsic aesthetic meaning? Or are they empty containers that can be filled with anything as long as it sells? I would say yes and no. A new creative director joins and immediately marks his or her territory with a tweak to the logo, a twist of the codes. That happens even before anyone touches the product — if they touch it at all.

Berluti was only founded in 1895, but it was a cobblers until 2011, when the label introduced a clothing line under the creative direction of Alessandro Sartori. Haider Ackermann stepper into his shoes when Sartori moved back to Zegna, only to be inexplicably replaced by Kris Van Assche after three seasons. This means there is virtually no archive. The Berluti man, meanwhile, went from being fiercely masculine to being soulfully modern to, well, read on.

"Luxury needs time: I took the eight months since my appointment to develop this collection,” said Van Assche backstage after Friday's show. Prior to that, he tweaked the logo, and delivered a series of posters featuring skinny young boys holding shoes by their laces over their shoulders. Not a major departure from his Dior Homme days. As a designer, Van Assche has a rather narrow repertoire: he likes tailoring skinny and lines exact; he likes boys young and bored, insouciant but well to do.

They looked a little bit more grown up at Berluti. "More into seduction," according to the designer. They also preferred brighter colour. And, this being Berluti, they wore leather. Lots of leather, fashioned into tailored pieces or motocross pants. This being Berluti, shoes also mattered a lot: slender and slightly pointy, footwear featuring metal toes.

It was a lot to digest, and it was full of awkward looks; rather freewheeling, but lacking cohesion. A few more months of study might help Van Assche hone the recipe. A house like this needs a sense of sophisticated nonchalance that has gone missing.