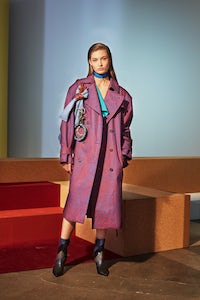 NEW YORK, United States — There can be few brands where the notion of designer DNA is as intimidating for a creative director as Diane von Furstenberg's. You play with it at your peril. So the fact that Jonathan Saunders is making it look so easy is a thing of wonder. It’s almost as if he’s lived that remarkable life of hers, so artfully does he communicate the verve, the playfulness, the sensuality that have made DVF a fashion icon. “It’s a natural fit,” he acknowledged during a presentation on Sunday.

But Saunders isn’t just a keeper of the flame. DVF has a new logo, a new store concept, a new website. And there was something grander about the new collection. The graphics were bolder, the colours were more intense, the clothes felt more grown-up. There was an eccentric sophistication in the way Saunders clashed eveningwear fabrics and flourishes with daywear textures, placing languid silk satin next to nubbly merino or angora, strewing paillettes over embroidered prints, mixing hot, artificial colours with earthy browns and camels. “Collage is a nice way of working with fabrics,” he said.

Saunders cut dresses from square-cut panels, which hung in asymmetric scarf points. Worn over trousers, they had a rich, almost tribal feel, an echo even of a Saint Laurent collection from the Seventies, which was underscored by the faux fur chubbies in eye-popping technicolour. That decade was, of course, the era when DVF and her friends created a timeless template of hedonistic glamour. In Saunders’ capable hands, its optimism and energy looked more seductive — and timely — than ever.