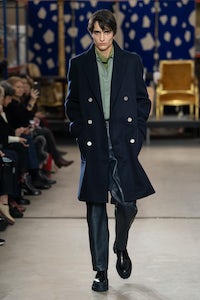 PARIS, France — Kudos to Hermès for the best show location of fashion week. The French luxury house took over the Mobilier National, a Neoclassical building housing an incredible archive of furniture linked to key moments of French history and never before used for a fashion show. The desk of Francois Mitterand, the star of the room, exerted a gravitational pull. As a choice of venue, it was also very fitting for Hermès: grand without being stuffy; it had authenticity and soul.

The lightness of spirit reverberated on the collection, which felt particularly light and nonchalant. Not that these are new words for Hermès: Veronique Nichanian has build her whole approach to the ultra-luxury brand’s menswear on informally formal lightness, which makes the work of the reviewer hard.

Hermès is not a showy show. It is classic, subtle, supple, but one should really get close to the clothes and touch them in order to fully grasp the suppleness of the leathers and the superiority of the craft. New were the metallic linings and the graphic motifs. For the rest it was pure Hermès: luxury understated.