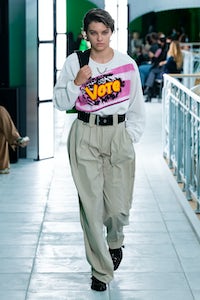 PARIS, France — One of the key topics of the season has been the integration of IRL shows with digital experiences in order to offer something special and unique to both present and remote audiences. At Louis Vuitton, the goings got positively sci-fi, in both an old school and hyper-new kind of way. There were 360-degree virtual cameras to offer unprecedented views to virtual guests, while the set, in chroma-key green, turned into a base to project images from the Wim Wenders movie “The Sky Above Berlin.” Said effects were exclusive to those watching the show online, as I was. It made for quite a powerful experience, enhanced by the labyrinth-like quality of the venue: the newly-revamped grand magasin La Samaritaine.

The movie was a meaningful choice in every respect, as creative director Nicolas Ghesquière focused his research for the season on the expansive area that separates the masculine and the feminine. Just as the shades of non-binary sexuality grow, so do the sartorial implications. Unisex would probably suffice, but the word sounds weak with so much conceptual rumination in the air.

And yet, for all the thinking, in the end genderless-ness usually means tomboyish girls wearing oversized boy’s stuff, from skaters’ attire to tailored pants, from humongous trench coats to graphic sweatshirts, which is, in fact, what the Louis Vuitton collection was all about, with its stress on the graphic treatment of prints that felt vaguely Raf Simons. “VOTE,” urged the first look, underscoring Ghesquière’s political agenda.

And yet, albeit not particularly convincing in conceptual terms, this was one of the designer’s most convincing outings for the house. He seemed to have found a new focus, and a new warmth, doing away with the excessive layering and the posthuman futurism. For once, this was a Vuitton one could imagine in real life, not just on a podium.