Nicolas Ghesquière’s Vuitton shows can come across as dry, but this one felt different. 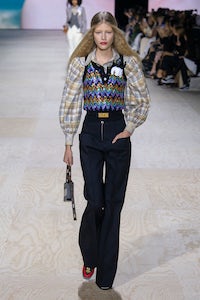 Nicolas Ghesquière’s Vuitton shows can come across as dry, but this one felt different.

PARIS, France — At Louis Vuitton, protocol is front and centre and Nicolas Ghesquière’s shows are strict ceremonies. Guests arrive at the Place du Carrousel — I. M. Pei's glass pyramid in front of them, the Louvre Palace at the right and the left — and, then, enter a smaller courtyard where the show is staged inside a giant box, nothing immediately visible of the set. It requires quite a few words to describe the process of arriving at the show. It's a long walk to get there, too.

After last season's Centre Pompidou extravaganza — the brand reproduced the iconic, 'inside-out' art museum as the set for the show — this season the mise-en-scène was stripped back: all blond wood, and a video projection of the underground artist Sophie singing “It's Ok To Cry.”

This season, the designer was not available for post-show interviews, but the house distributed a prepackaged Q&A saying the collection reflected the spirit of La Belle Époque, a brief time of frenzied change and burgeoning modernity from the end of the Franco-Prussian War in 1871 to the outbreak of World War I in 1914. From there, Ghesquière ruminated on the obsolete and the forgotten, and ultimately on the dandyism, snobbery and extravagance which are the roots of French elegance. It was a lot, pointing in many different directions, but Ghesquière is a master in creating unity from disparate elements. His angular signature keeps it all together.

Vuitton shows can come across as dry, but this one felt different. It was almost psychedelic, swirling with pattern and colour. Apart from a couple of Sarah Bernhardt looks in the finale, and some fierce mannish-dandy tailoring, the Belle Epoque was mostly about the spirit, not the shapes: freewheeling and open-minded, pointing right, style-wise, at the debauchery of the 60s and early 70s — short, svelte and with boots. There was a lot of vintage thrown in, but everything was collaged together and got the ultra-modern, Ghesquière treatment. Was it nostalgic? Most definitely. Nostalgia of the future, that is. Rather lively, too.