At Pitti, Eternal Youth and Experiences

The rise of the ‘millennial mindset’ looked particularly radical within the frame of Pitti Uomo, where the peacocks posing in tailored regalia look completely passé.

At Pitti, Eternal Youth and Experiences

The rise of the ‘millennial mindset’ looked particularly radical within the frame of Pitti Uomo, where the peacocks posing in tailored regalia look completely passé.

FLORENCE, Italy — Forget about millennials, the fashion establishment’s current obsession. It’s all about a wider “millennial mindset” taking hold across the luxury market, changing the values and purchasing habits of all generations of consumers, who crave youth more than ever.

The shift looks particularly radical within the frame of Pitti Uomo, not least because the Florentine trade fair, although quite rich and diversified in its offering, has long been considered a prime purveyor of quintessentially Italian formalwear.

Now, the peacocks posing in tailored regalia around the Padiglione Centrale look completely passé and tailoring brands are struggling to stay in sync with the times without trying too hard. Only a few have managed to successfully grapple with the shift. Corneliani, for instance, a label with a century of history, displayed a renewed interest in softness and performance, tweaking a perfectly classic wardrobe in a way that felt fresh and young, without looking forcibly so.

But in fashion, today's rebellion can be tomorrow's convention — and vice versa. Is the millennial mindset upending fashion set to become the convention du jour? Food for thought.

Paul Surridge, the creative director of Roberto Cavalli, is igniting a new energy at what once was a temple of bad taste. He still has a long way to go, but Surridge acknowledged the need for metropolitan styles that are dominating the market and went right there. This won't make him a fashion leader — the sneakers were probably a bit too obvious — but the match of poptastic animal prints and urban shapes felt energetic. One just hopes the management gives him adequate means to operate because the collection he showed in Florence was clearly produced with budget restraints, looking more like a contemporary range than a high fashion line. 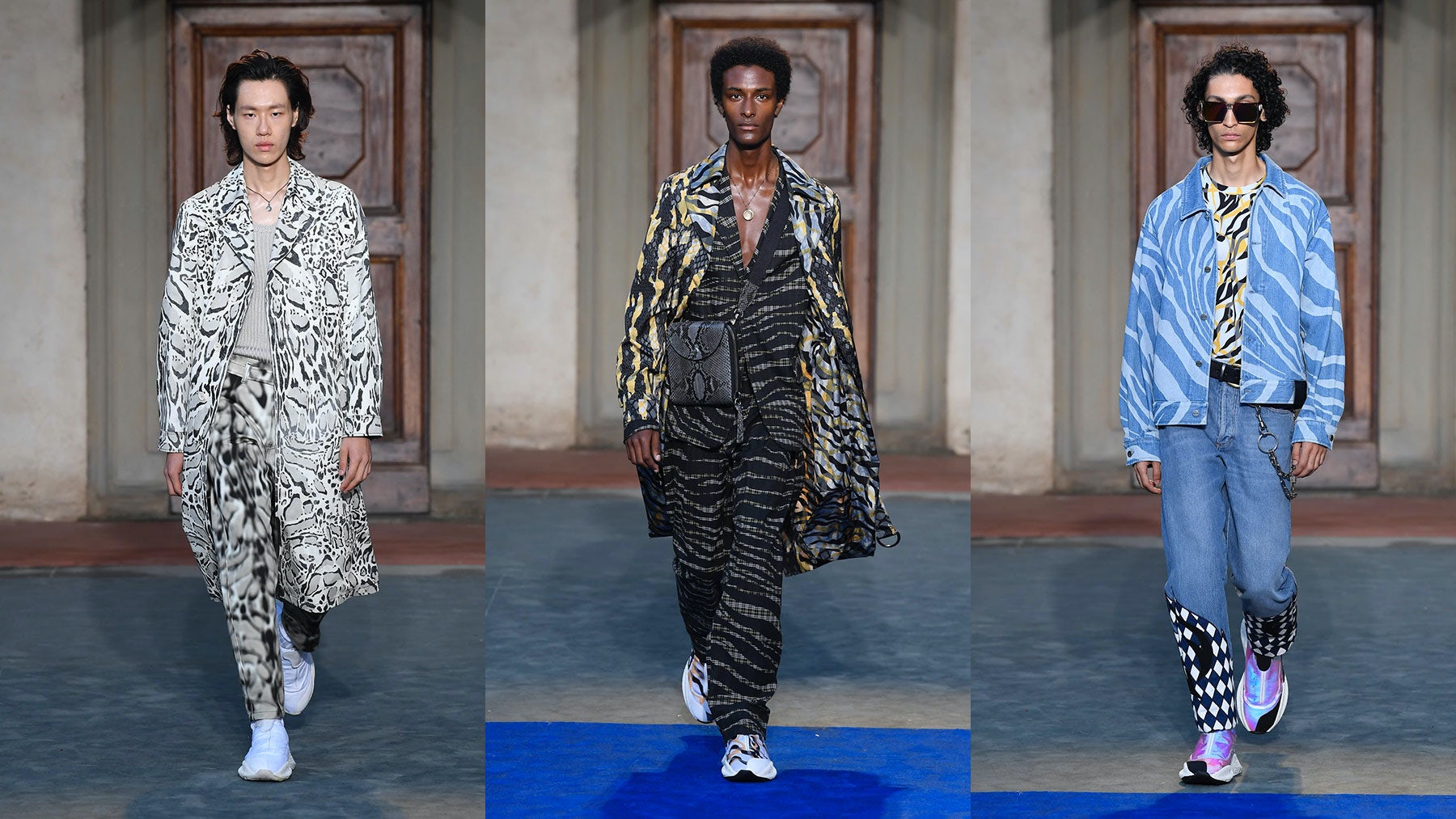 View Collection
The emphasis on millennials is perhaps most importantly about clothing that works for any time of the day or night, because occasion wear is passé. And the debut of Comme des Garçons alum Fumito Ganryu’s first independent label tended in this direction. It was a wholly personal take on urbanwear, at once pared down but inventive. Actually, everything was so pared down that its most innovative element — waterproof scuba fabrics, mostly — went almost undetected and what was initially heralded as conceptual streetwear turned out to be less conceptual than expected. Yet, avoidable Comme des Garçons touches aside, this was a good first collection.

Alongside the “millennial mindset,” the outdoors is another major theme running through fashion right now. We are all increasingly mobile and want our clothing to perform at its best. Pitti really hit the mark with a whole pavilion on the topic, titled “I Go Out” and showing the latest developments in the category from innovative brands such as And Wander, Griffin and Christopher Raeburn. What really stole the scene, however, was Sease, a line of sailing gear made in treated traditional luxury fabrics just launched by Franco Loro Piana. The line marries functionality with formality for a look that is both grown up and nonchalant.

Federico Curradi, who this season showed in Florence instead of Milan, is one of Italy's brightest new talents — and surely its most assured colorist — but he prefers to work under the radar, marching at his own pace. He deserves more exposure, because his merging of artisanal flair, ease and sensitivity is outstanding. He did fishing and sportswear this season, delivering loose silhouettes that felt simultaneously poetic and pragmatic, and hence very fresh.

Compared to Curradi's low-budget poetry, the MCM show, a rather over-produced effort that leaned on rain, dancers and loud music to present the brand's first foray into apparel, looked pointlessly grand. The German label, now the property of Kim Sung-Joo, did not move the fashion conversation forward. Sometimes less is definitely more.

Cos is certainly a company that packages less in a considered way. Their presence on the Pitti calendar felt incongruous at first; maybe even pretentious. But this was not the case. Collaborating with choreographer Wayne McGregor, Cos unveiled a pared-down collection of minimalistic pieces presented as a dance performance. The concept was strong but the delivery was a tad undecipherable. What’s more, the clothes looked not ideal for dancing. 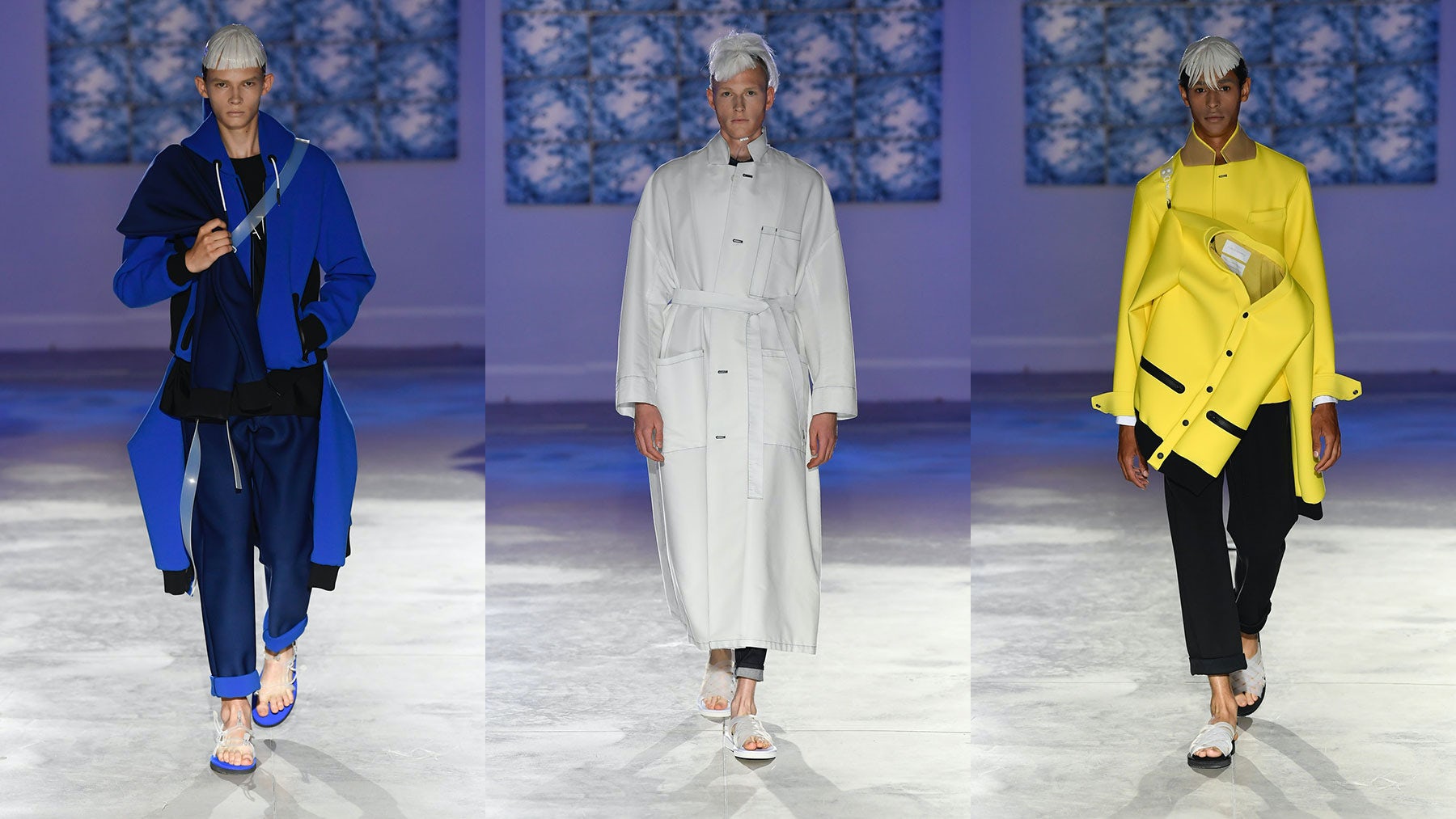 View Collection
Elsewhere, it was exciting to see Palazzo Pucci invaded by mannequins in every color showcasing a small selection of archive pieces from every decade of the house. There is a lot of talk about the value of heritage for brands like Pucci and this was a lively and engaging way to show that archives can be living organisms, not dusty places.

Gucci is the first house that did this with its trademark eccentric souvenir shop way. This season, Florence's Gucci Garden opened a new room devoted to the collaboration between Alessandro Michele and Björk. The occasion lacked heft — the two have only worked together on the costumes for a video — but it made for another catchy Gucci experience.

The “Fanatic Feelings: Fashion Plays Football” exhibition — albeit focused on the intersection of fashion and soccer, which had the potential to be a stimulating and well-timed concept with the start of the World Cup — somehow failed to score a goal. Conceived by curator Francesco Bonami and journalist Markus Ebner as an experience, not just an exhibition, it missed the point mostly because it was not nearly as intense as a genuine football match.

Which brings us back to the millennial mindset: staging experience today is critical; in fashion as much as anywhere else. It actually counts more than the clothes. This was certainly the case at Craig Green’s otherwise excellent show. Green's ongoing exploration of workwear took a touching psychedelic turn this season, but designer’s ritualistic performance in the Boboli Gardens lowered the temperature instead of heating it up, which was a pity.