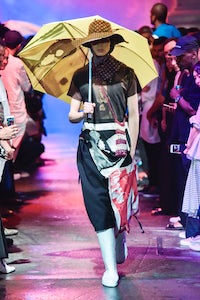 NEW YORK, United States — Fashion people love to complain, but if Raf Simons asks them to head to Chinatown at almost ten o’clock at night and stand for his show in the sweltering heat? Well, you (almost) won’t hear a peep from the crowd. That’s because Simons is a lodestar. And thanks to his recent appointment as creative director of Calvin Klein, his namesake menswear line has moved its shows from Paris and is now the main attraction at New York Fashion Week: Men’s, which is still elbowing its way onto the fashion calendar. (“It’s the only show I’m going to this week,” one prominent retail buyer was overheard saying in line.)

“I think Raf is just a very creative person and that he’s culturally aware,” said Marc Jacobs, who was vaping from the show’s makeshift standing-room-only front row. “I think the way he sees things, and the world he’s created in menswear, is very specific. I hate to use the word artist in fashion, but his creative merits are so great and it’s wonderful to see how he manifests his ideas in clothes.”

Beers in hand, the diverse crowd included skater boys, hypebeasts and tony fashion editors all gathered in a garishly lit alley reached through chintzy beaded curtains and strung with red-and-white lanterns. Who else could conjure Julianne Moore (in a quilted coat from Simons’ Calvin Klein debut), Jake Gyllenhaal and A$AP Rocky all under one roof? Raf.

The show was, essentially, a classic East-meets-West tale, the kind that designers love to toy with from time to time. Simons layered in influences from the 1982 film Bladerunner for a dystopian twist and the work of Peter Saville — who recently helped him redesign the Calvin Klein logo — for graphic punch. Backstage, Simons conjured the romance of Asian cultures and the beauty of couture (an ongoing influence) as starting points, and yet one couldn’t help feel the slight undercurrent of menace in the torn umbrellas and hefty rain boots. It’s the sort of tension that makes a collection like this feel alive and exciting. It’s the type of thing for which Simons is known.

“That’s what streets are all about,” Simons said backstage of his cultural mashup. “Living in New York you feel that strongly.” At it’s heart, the collection was about a coat — voluminous and cocooning, in a slick leather — a pair of knee-length shorts, boots and a bag. (The bags were made in collaboration with Eastpak and tailoring with The Woolmark Company.) Within that framework, he toyed with other ideas. The oversized, slashed collegiate sweaters, flag-like overlays emblazoned with photo negatives from Saville’s oeuvre, the kimono-style tailored jackets, the skinny knits, billowing tunic tops and long skirts reminiscent of monks. Little hints from his past collections were left like a trail of breadcrumbs for Raf obsessives to dissect. “We try to be daring,” he said, as trains on the Manhattan Bridge rumbled by overhead. “We try to make it different, to not be so literal.”

There was a feeling of athleticism in the collection, but not in the typical athleisure-y type of way, currently seen on many other runways from Europe to New York, where track pants and sporty jackets reign supreme. Here, it was the hulking, beefed-up shapes contrasted against the leaner ones — which made you aware of the body beneath in two totally different ways — all topped off with plaid or floral hats with neckerchiefs that had an unmistakable mumsy feel. There was a richness to the palette, from the deep violets, burnt umber, and splashes of firetruck red laced throughout, and then the shock of a clean white trench, which closed the show. While that look had a clinical feel, the collection as a whole was an evocative and deeply felt affair.