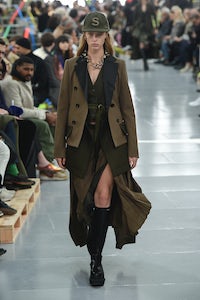 PARIS, France — Chitose Abe has always loved a uniform. In that light, the military aspect of her latest collections was nothing new. What did feel different was its militancy. As usual, her show interwove menswear for the upcoming Autumn/Winter season and her pre-collection for women, but they were completely locked in sync. Abe claimed her message was peace and love. Her men and women walked with necklaces and earrings of interlocked rings, eternal symbols of human union. The pulsing electronic soundtrack eventually resolved itself into Patrick Cowley’s mix of I Feel Love. But it was less romance than a spirit of resistance that struck me. Love in wartime, maybe. A revision of the Talking Heads classic Life in Wartime: “This ain’t no party, this ain’t no disco, this ain’t no fooling around. No time for dancing or lovey dovey, I ain’t got time for that now.”

Yep, these are dark, urgent times, and Abe captured the mood in her own ingenious way. The uniform she had in mind was actually the pant suit, what she considers to be “head to toe” dressing. She realised it in looks that appeared to be individual items – coats, jackets, skirts, trousers – artfully deconstructed and reassembled as one piece. The illusion was so complete that I doubt that it ever occurred to the audience they were looking at anything other than extremely accomplished layering. Sartorial hybrids have been Abe’s signature for so long that their unquestionable ingenuity has become familiar to the point of ennui. Here, however, she punched through that logjam of seen-it-all-before to create something tough and topical, like the denim jacket and khaki wool pencil skirt fused into one piece with the help of a zipper. There was even something futuristic about such a notion.

The hybridisation hardly stopped there. You imagined Abe waking up in the middle of the night and wondering, “Can I make this go with that? Oh, what the hell!” Which is how we got a varsity jacket with a capeback. Baseball meets Balenciaga! In her very Japanese fangirling over Western culture, Abe moved on this season from artists, DJs and The Dude to Albert Einstein, Marilyn Monroe’s obscure object of desire. Her T-shirt quoted him: “Common sense is the collection of prejudices acquired by age 18”. Her translator insisted that common sense for Abe is to do something that isn’t commonsensical. Hey, look where that got Albert. Maybe Sacai is fashion’s e=mc2.