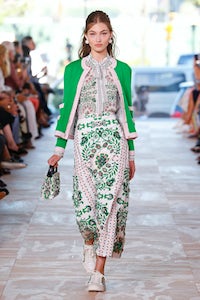 NEW YORK, United States — There are times when fashion directly reflects what’s going on in the world, other times when it subliminally takes the temperature of the moment. In a year marked by the 15th anniversary of 9/11 and a particularly polarising election, Tory Burch wasn’t the only New York designer with a vision of a kinder, gentler America in mind when she came to create her Spring collection.

Her clothes are always charged with optimism. This season, there was innocence too, maybe because she was thinking of her younger days, growing up on the East Coast but taking family trips out West. So the collection’s compass points were Newport and Malibu. One was patrician Tory, crisp little separates in golf green and tennis white (the frill of green on the sneakers was a nice touch), an awning stripe pantsuit, and yachting references, like the rope prints, the sailor pants or the print of an old ketch.

Clean as a whistle, but nothing to raise the temperature. A sweeping hostess skirt printed with roses, scattered with sequins, or a hot pink caftan filigreed with gold and paired with pearl-encrusted slides had more zing. They needed only Slim Aarons and his camera to complete the picture.

Malibu brought out the bohemian in Burch: long, smock-y looks in hot colours or blinding whites, artisanal flourishes like batik prints, rick rack, embroidery and macramé, fringed, beaded suede booties. But, truth to tell, there wasn’t much difference between prep and boho in Burch country. Her last look said as much, combining a cotton cardigan celebrating Maine (there were patches of a lobster, sailing boats and an old sailor) with a button-through skirt in that vermilion batik.  In Burch’s vision, good taste is a great leveller. It won’t ever sizzle, it won’t ever shock, but it also won’t ever let you down. And, right now, that doesn't sound so bad.