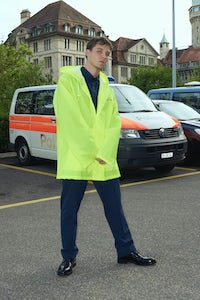 PARIS, France — When Demna Gvasalia calls his Vetements project “a creative lab of ideas,” he’s talking about a whole lot more than fashion. Now that he’s set up in his pristine new headquarters in Zurich, where a tidy environment begets a tidy mind, the clothes are becoming a platform for a host of other activities. That much was obvious from the Vetements presentation in Paris on Saturday.

OK, it was in a big, ugly concrete car park, and we’re all familiar with the appeal of the brutalist anonymity of a concrete car park to a certain segment of fashion’s avant-garde. And Gvasalia’s car park was the municipal one, where disgruntled citizens have to go to reclaim their tow-aways. A monument to bad vibes, then.

Except he made it better. The sun shone, the music played and the walls were lined with his massive portraits of people in Zurich wearing the new collection. That was the “show.”

The 'models' were shown a picture and asked to duplicate the pose, if they so chose. The request yielded some fabulous results.

The presentation was a kind of love letter to Gvasalia’s new hometown, sixty pictures of ordinary Swiss people scouted on the street. “It could be the lookbook of the last show,” he said, referring to the collection of socio-economic archetypes he herded through the Centre Pompidou for Autumn/Winter. “But here it became more human. It’s about real people.”

His street cast styled themselves. Gvasalia said that, for them, it was like shopping. For instance, the black cousins (“Destiny’s Child” he called them) came in and headed straight for the black leather. “It could be this on the street,” he said. “It’s not really fashion.” Remember those words.

The shoot itself was an intense four days. The “models,” were shown a picture and asked to duplicate the pose, if they so chose. The request yielded some fabulous results. The kid in the barre pose? He used to do ballet. The grande dame? She was once a model. The angry old man? “He chose anger, because that was his idea of fashion,” says Gvasalia.

Looking at the pictures, you sense certain set-up ironies in the juxtapositions. “This is actually how it is there,” the designer clarifies. The guy outside SwissLife, for instance. “He’s wearing a Vetements double shirt which you can open from the back and that immediately gives you something quite perverse,” Gvasalia says. “He actually does work in an insurance company, and those guys are already a little spooky, perverse."

You’re kind of looking for that subtext with everything the Gvasalia brothers do. Like the Balenciaga show in the Bois de Boulogne the other day, where the looming presence of Kyle MacLachlan, AKA Agent Cooper from "Twin Peaks", made people think about perverse goings-on in woods dark and deep. There was a flavour of that in the Vetements presentation as well. Every episode of the new iteration of David Lynch’s tv series concludes with a convincing performance by an unjustifiably little-known band, almost as though Lynch is wearing an A&R hat among the many other guises he assumes on "Twin Peaks". Demna’s live performance was a Viennese combo called Lovehotelband, as anomic yet mesmerising as any Lynch discovery. David, look them up.

But balance that ambiguous subtext with Gvasalia’s contentment in his new home. “It’s the complete opposite of Paris, no stress, no rush,” he says. “There’s never been a war there so the people are in a good mood. Very selfish but very happy.” He describes the photo shoot as a way to integrate Vetements into the community. Gvasalia made friends. The “Destiny’s Child” cousins have invited him to go out on the lake with them next week.

And if you look at these pictures, and reflect on the cool-dad-ophilia of the Balenciaga show, you’d be well within your rights to imagine that Demna’s getting broody.