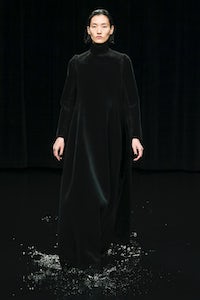 PARIS, France — The day began in Paris with the soaring gospel of Kanye West’s Sunday Service. It continued with an Issey Miyake show which embraced a reassuring brother-and-sisterhood of humanity. Then, around midday, Sunday’s warm fuzzies dissolved in the fire and brimstone of Balenciaga’s apocalypse, almost Biblical in its obliterating fury. As an ardent follower of @thesavemovement, it was perversely thrilling to see Demna Gvasalia use his powerful fashion platform to stage such a takedown of all that man has wrought.

I emphasise the word “stage” here. The presentation was everything. The set was an auditorium, as impressively official as last season’s governmental situation, but this time with a couple of rows of seating seemingly underwater and cast in power-out shadow. The models walked through inches of water. (Gvasalia wanted gasoline…imagine how terrifying that would have been with so many combustible personalities under one roof.)

Overhead, a low-hung ceiling of effects offered a pell-mell vision of boiling heavens, blazing fires, rushing floods, a temporarily reassuring vision of the beautiful blue marble of Planet Earth suspended in the void of the multiverse and then….total eclipse. It was stunning. Really. Forced-back-in-seat-hard-to-breath stunning. And under this spectacularly nihilistic umbrella, a hundred men and women modelled a collection of Gvasalia’s new designs for Balenciaga.

New? Not so. The brand’s signatures were paraded once more: the shoulder story, the second skin dresses, the logo-ed sport (Team BLNCG), the buttoned-up florals, the plissé, the secret police chic. Gvasalia undoubtedly pioneered the bourgeois bondage theme that has tickled fashion’s fancy this season, but he is an evolutionary, rather than revolutionary, designer. He claimed he spent his holidays at his sewing machine reworking his own wardrobe. “Back to my roots of dressmaking, that’s my calling I imagine. I enjoy few things as much as making clothes.” Extend that into his professional life and you could see how Balenciaga, too, became an exercise in reworking, subtly altered by the complex narrative with which he shaped the collection.

The casting was critical. Gvasalia said he imagined his models as survivors, “people with opinion, style, intellect and open minds.” There was something hierarchical in the situation, from aristocrats to bike messengers, and a couple of men who were GIANTS (he said one of them was Mister Universe a few years ago). “A real community of people I love and admire,” Gvasalia called them. “I love the bike messengers in particular and, of course, I’m interested in the certain ‘perversity’ of an aristocrat. But I feel that fashion can only survive if it opens itself up to everyone. I do not think of hierarchy but I think of characters that those people represent.”

Something that stood out more than usual — perhaps due to the currently prevalent sense that a godless world might be about to meet the maker it has carelessly abused for far too long (and people, I mean Mother Nature, not the beardy weirdy sky god) — was a bizarre monasticism. Maybe it was the gasoline fumes, but I could swear I saw Alek Wek as a female pope. “Fashion is my religion in a way,” Gvasalia said, “ and, like in religion, I do not question why I do it. It just feels right to me.”

We were, by the way, communicating via email, and, later in the “conversation,” he had this to say: “The world is flooded by its post-industrial, self-afflicted problems and I wanted to create a metaphor in which people walked over those problems. Like the biblical walk on water, it raises questions of what is real and what is not and what to believe in and what not. I wanted it to have a certain drama (of course...), but I also wanted it to be beautiful and magical. So I thought of flooding the studio with petrol and having my cast walk all over it. I think I wanted magic and danger to sort of waltz together.”

Social media was instantly venomous about the hypocrisy of a designer daring to present a vision of a dying world whose death he was contributing to by the very nature of the industry in which he worked. I posed that conundrum, via email, to Gvasalia. “I think our growth and the wellbeing of the planet can be very well-balanced. We just need to realize that this wellbeing is costly and we all have to pay for it now. Brands, consumers, everyone. There is no other way. I think there are just too many brands and too much product that no one needs. It all needs more consciousness and a good ruthless edit. But again, one needs to be really brave to do that in today’s industry. So fingers crossed, I am and will be trying my best to find that new balance as long as I do fashion.”

Not an answer I imagine would satisfy the naysayers. From my own rather bleaker standpoint, I’d say we’re way past time to make amends to the natural world. And that would have been the message I took away from the Balenciaga show if Gvasalia hadn’t insisted: “I am trying to be brave in the world I live in and hoping that my message will reach its audience. I feel like a ripple in the ocean but it feels good to assume that and actually be part of that ocean. And I’ve seen bombs explode around my house when I was 10 years old, so I know one needs to be brave to survive and to be happy.”

It’s been such a difficult season in Milan and Paris, with the earnest endeavours of everyone who diligently toils away in the fashion industry seeming more irrelevant by the day. It was some kind of perverse validation to feel the Balenciaga presentation rolling all the doubts and fears into one cataclysmic ball, and, therefore, almost disappointing to learn that it was actually a coincidence.

“We started working on this season’s concept about a year ago,” Gvasalia wrote, “but never thought of it to be some ‘actuel’ until the last couple of weeks with everything that’s happening around us today. This often happens with my work, some kind of fashion prophecy and connection to the now. But I must say it’s pretty unintentional every time. It just happens to be so linked to ‘the now,’ maybe because that’s where I always seek my ‘inspiration,’ in the present moment.”

OK, so he’s an unwitting prophet. Naturally, that made me wonder who the prophet’s prophet was. Gvasalia claimed it was Eckhart Tolle. “‘The Power of Now’ is my best rule book of survival and love of oneself. Once we love something we cannot really hurt it.” Good Lord, the man who just bombarded us with the most coruscating vision of Planet Earth gone horrendously, irremediably wrong is truly an optimist!