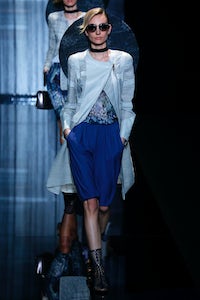 MILAN, Italy — If greige was the shade of the Armani revolution, navy has been the colour of his most recent triumphs. So the invitation for his new show — deeply navy, seductively textured — promised everything. But promises are so easily broken.

Early warning sign: the collection was called Charmani, a cutesy coinage which seemed like something Nicole Scherzinger would make up, hardly appropriate for a designer of Armani’s taste and discretion. The show notes insisted that the neologism was all about “a new balance between discipline and freedom”.

That translated into Armani’s signature unstructured tailoring rendered in equally unstructured and pallidly diaphanous fabrics, which left everything just a little too formless. And once Armani added the sparkle of sequins and crystals, the weightlessness of georgette or organza suddenly became a little less so. Here was a classic Armani jacket, but the body was completely sheer, with beaded sleeves that look heavy by comparison.

As easy and fluid as Armani’s designs have always appeared to be, they actually have a fiercesome precision. That is how they have managed to win the undying loyalty of a demanding customer base. So the biggest problem here was the surprising limpness, not helped at all by baggy bloomers.

The customary sensual skim of an Armani jacket over the body beneath was exaggerated, compromised by outbreaks of curious fringing. The designer is a past master of allusive, mirage-like visions of lightness. There were tulle overpants here, like veils, and a moonlit sheen over the whole affair, which ought to have been magical. But this time, the magic and the mystery were missing.