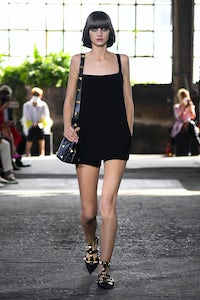 MILAN, Italy — Romanticism is not easy to define. It is certainly an outlook, a way to interpret things — and life. It is a point view. Romanticsm, in fashion, is often a shortcut for a formulaic prettiness. Not for Pierpaolo Piccioli of Valentino, probably contemporary fashion’s most diehard romantic. “You can be both romantic and assertive,” said Piccioli backstage after the Valentino show that closed Milan Fashion Week on a high, profoundly personal and indeed assertive and eerily romantic note.

All the familiar Valentino codes — both those of the house, and those that Piccioli’s tenure has brought, from the flowers to the flowing flou, from frills to a certain bourgeois properness — were there, but arranged and connected in such ways that they delivered unexpected, if not completely new, meaning. Piccioli used the word “re-signification” to sum up the show: venue, casting, clothing.

This was Valentino as we know it, but not quite. We were in Milan, for a start, in a run down industrial building rather than in the grand salons of the Hôtel Salomon de Rothschild or on the grounds of the Hôtel des Invalides in Paris as before. It was filled with flowers, though, guerrilla-style; and the music, this time performed live by Labrinth, was extra-emotional. Meanwhile, the models, both women and men, were not the familiar, ethereal super-beauties, but real people from all walks of life with all their glorious imperfections, which made a fundamental difference.

A girl with green hair opened the show wearing the shortest little black dress, which set the tone for what followed. Truth be told, the context and the cast were the main signs of “re-signification” but the clothing, and the accessories in particular, oozed a new sharpness, a certain soft dryness, too. The outsized Rockstuds, on both kitten-heeled pointy shoes and bags, were particularly noteworthy: objects of desire in the making. And the focus on product — meant in a positive way — was evident. A few pieces like the oversized shirts worked on both men and women, but overall it looked like the menswear needed a bit more focus.

Of late, Piccioli has aspired to make Valentino the house of romanticism fired with radicalism, an exciting prospect. It will take a few more steps to get there, but this show was good progress. Romantic it was, but not sugary. Radical, a little less, the casting aside.