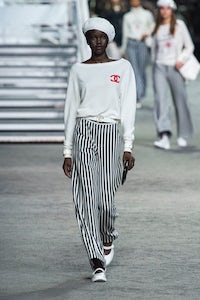 PARIS, France — Oops, he did it again! This time, Karl Lagerfeld filled the glass-domed Beaux-Arts exhibition hall of the Grand Palais with a 500ft ocean liner named La Pausa. It was docked under a star-studded sky, twin funnels belching steam in anticipation of departure, while the light from a misty moon played on gentle waves. The effect was a little like an opera set, or a Fellini film, where the effect of waves would be created by the undulation of artfully lit plastic bags. Gorgeously artificial. And it demanded an equally gorgeous collection to set it off.

Lagerfeld has, of late, shown two Chanel collections (Metiers d’Arts in Hamburg, and his last ready-to-wear) whose somber adult elegance would have shone against this nocturnal backdrop. But it was Cruise 2018 that he was showing on Thursday night, and cruise collections tend to shy away from notions like ‘somber’ or ‘elegant’ or, unfortunately in this case, "adult."

The essence of cruise is, after all, leisure. Sun, not shadows. Clothes you throw on and forget about. Like the look that model of the moment Adut Akech was wearing when she stepped out on the dock: a slouchy white sweatshirt, loose striped pants, white mary janes. A perfect summer look. And it was followed by a string of similarly straightforward, relatively classic outfits. Spirited, youthful. But then the girlishness got a grip on the collection and things went awry. Cropped denims distressed into a frenzied accordion of fringing? Please, let’s move right along to tops cropped to bare an inch or so of midriff over flared skirts, an unflattering affectation made even more so when sleeves were puffed princess-style. They definitely underscored a focus on the waist. Shirred detailing and wide belts did the same. So did the tiny pearls strung round what might have been a black PVC mini skirt. (This look was possibly "cruising," more than "cruise.") But to what effect was that focus?

La Pausa was the holiday home Coco Chanel built in 1928, in Roquebrune-Cap-Martin near Monaco, and, in a collection this size, there were inevitably some outfits that evoked what would have surely been the sleek, effortless glamour of Chanel and her guests. Things as simple as another pair of those striped cotton pants paired with an elongated navy knit, or plain t-shirt dresses elevated with sequins, dressed-up basics for hotted-up nights.

Maybe there was some kind of heavy irony at work. There was a curiously decadent, even ominous air permeating the show. La Pausa looked like a ship that had seen better days. Michel Gaubert’s soundtrack featured reworked party tracks – ‘The Whistle Song’, ‘Finally’…the logical finale would have been the Village People’s ‘In the Navy’. Instead, we got their ‘Go West’, but in Pet Shop Boys’ version. Elegaic, rather than celebratory. Underlining the inescapable impression that Karl Lagerfeld does much better these days when he crosses to his dark side. Fashion's Darth Vader?

Disclosure: Tim Blanks travelled to France as a guest of Chanel.