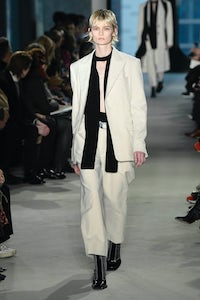 NEW YORK, United States — If Lazaro Hernandez and Jack McCollough needed a theme for their new collection, Joni Mitchell came up with it decades ago: “You don’t know what you’ve got till it’s gone.” The duo dissected familiar items of clothing then reconstructed them, leaving the odd bit out so that the result was slightly off. Their intention was that your memory — of a coat, a dress, a sweater — would fill in the gaps. Now, that could have been quite an ask, but it didn’t really play that way here because nothing was so wayward that it looked wilfully wrong. In fact, there was actually something quite romantic about a trench coat drifting sideways, a black scarf twisted into its structure as a reminder of negative space. There were all sorts of flourishes like that, zipping or buttoning on — fragments of jackets in denim or black leather turned into bibs, lapels as scarves, sweaters reduced to tabards.

“Recognisable but new,” the designers claimed. “Without the crutch of technology.” Their last collection, the one that marked their return to New York after a couple of seasons showing in Paris, had a similar back-to-basics earnestness, but it was undone by the inescapable feeling that its recognisability was based on the work of other designers. Here, Hernandez and McCollough referred to their own back catalogue. “A splash of the past,” they called it. Maybe more than that, because it was a valuable reminder of the sensuality, the oddly un-American quality that gave their work its original perverse tang. It was in something as simple as the sinuous, sheeny, feather-trimmed turtleneck that accompanied a slouchy black skirt, as striking as the cascades of pleats edging their asymmetric way from underneath other skirts, or as obvious as the trench in a shivery, pearlescent latex.

How such an item would fit into “the wardrobe of a New York woman” — which the designers insisted they had set out to create — might be the stuff of riotous conjecture, except that they also insisted they wanted to refine and refine — and then undo. Control and abandon. It’s a powerfully visual dichotomy in a collection of clothes, and Hernandez and McCollough took steps to claiming it.