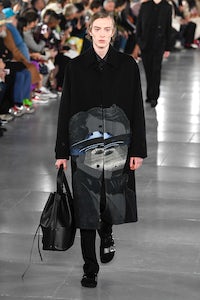 PARIS, France — Pierpaolo Piccioli’s enthusiastic embrace of streetwear was an anomaly in the history of the house of Valentino. He was acting on his conviction that, for a couture house to be relevant today, it has to be open to new opportunities. Still, if he went a little too far in getting down with the kids, his heart was in the right place. Change or die. You can’t fight that.

Piccioli is still of a mind that streetwear is now an irrefutable part of contemporary life. “No one is going to renounce sneakers,” he insisted the other day. But the collaborations that illuminated his latest men’s outing for Valentino were a whole other level of high/low outreach.

Start with the low. Sorry, Birkenstock, but Piccioli was attracted to the fact that yours is a shoe that stands for “no gender, no status, no money.” Therefore, universal. And equally therefore, something to generate tension in a heady couture environment. Piccioli’s boys walked in Birkies with socks. Picture Valentino Garavani himself in a similar footwear arrangement and you’ll appreciate how the tumbril of time will eventually roll round to collect us all.

Piccioli’s other partner on his new collection was literally a universe away. Jun Takahashi is the mastermind behind Japanese label Undercover. The two met when Valentino showed its pre-fall collection in Tokyo in November. After Undercover contributed to Valentino’s installation at Ginza Six, a further collaboration was quickly on the cards. “I love Jun because he is kind of unpredictable,” said Piccioli. Understatement!

Takahashi delivered the defining graphics of the collection: an image of Edgar Allen Poe with a flying saucer super-imposed over top, another visual that serially printed Ludwig van Beethoven’s face everywhere. Why? The barest explanation would be offered in the stunning Undercover show which happened two hours after Valentino’s, when Takahashi showed the same prints in a link-up that was, as far as I can remember, unprecedented in fashion. If Piccioli was chasing relevance, he’d garnered it in spades.

But that is what makes him one of the most interesting designers in fashion at the moment. He is so open. Piccioli defined his challenge like so: how can you wear a suit with the same approach as a hoodie? Soft layering was one answer. An unstructured silhouette of shirt, jacket and trousers in the same fabric. Luscious oversized knitwear. Cardigans elongated into coats. A long hoodie cut from felt. A turtleneck and cardie making a male twinset. And don’t forget the capes.

The ease was intensely seductive, the languor a decadent distraction from those sporty sneakers that have made the fortune of Valentino’s menswear. But take an army-ish jacket and lavish it with a UFO in couture-quality embroidery and you have a particular hybrid which, in its arcane essence, embodies fashion’s enduringly mysterious appeal. Thanks, Pierpaolo. Thanks, Jun.