Dolce & Gabbana and the Wild West

The wild frontier provides window dressing for a perfectly serviceable collection of the duo's classics. 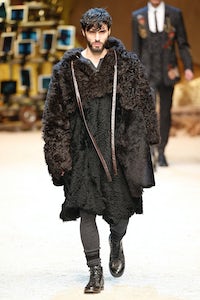 Dolce & Gabbana and the Wild West

The wild frontier provides window dressing for a perfectly serviceable collection of the duo's classics.

MILAN, Italy — Domenico Dolce was seven-years-old when Spaghetti Westerns arrived in his village in Sicily. His favourite was “For a Few Dollars More.” Little Dom loved Clint Eastwood for his “quiet and intelligence.” Stefano Gabbana, on the other hand, preferred Barbie to cowboys. “Mae West maybe, but Westerns? No!” he declared after Dolce & Gabbana’s show today. But it scarcely mattered that he felt no natural kinship with “Sicilian Western,” the theme for their new collection, because, as he said, “We do it our way. No hats, no boots.” Whip-stitched knits, though. Some Western topstitching, and plenty of riverboat-gambler silk pyjamas too. (Have these two created a new night-for-day category?) And Gabbana might also have added there was a healthy dollop of exuberant camp that saw cacti, pistols, horseshoes, bucking cowboys, even a covered wagon, rendered in extravagant beadwork or pioneer sampler-style embroidery, which was then plastered all over the collection.

When it worked — with a denim outfit artfully tapestried with flowers, for example, or embellished velvet blazers — it had all the perfectly turned excess that Domenico and Stefano can manage with their eyes closed. But, there were other moments when the appliqués were so random that they felt like arbitrary window-dressing for what was — stripped of ornament — a perfectly serviceable collection of Dolce & Gabbana classics: sharply tailored suits, denims and leathers.

Of course, that’s nuts, because these designers would scarcely settle for "perfectly serviceable." Their 'more-more-more' sensibility hit pay dirt with one giant poncho in black shearling, another in fringed herringbone and a floor-sweeping coat, also shearling, the scale of which was cartoon-ish. They do that very well, slipping a little playful naiveté into their hyper-grown-up clothing. Here, there were also cute cartoons of pioneering types that were quite at odds with the glowering intensity of spaghetti Westerners.

But as anyone who followed Stefano’s Instagram over the summer will appreciate, life is a game for these two. And, you win some — you lose some. Still, Dolce pointed out it was an Italian, Sergio Leone, who had the breadth of vision to put a has-been American TV star to work as “The Man With No Name,” thus gifting the world with Clint Eastwood. What was he implying? That Italians can still do it best? 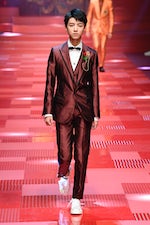 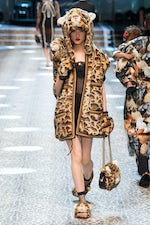 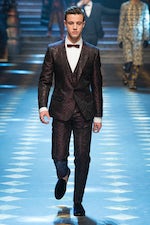 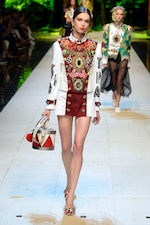