Early in New York, Talent Amidst the Filler

Though New York Fashion Week has a bad rap for championing commercial labels, some designers proved their talent while others stumbled.

Early in New York, Talent Amidst the Filler

Though New York Fashion Week has a bad rap for championing commercial labels, some designers proved their talent while others stumbled.

NEW YORK, United States — More than four decades after the Americans won the infamous 'Battle of Versailles' — which pitted French designers Yves Saint Laurent, Pierre Cardin, Emanuel Ungaro, Christian Dior and Hubert de Givenchy against their American counterparts Oscar de la Renta, Stephen Burrows, Halston, Bill Blass and Anne Klein — and twenty years after they started winning positions at the top of Europe’s most important fashion houses, New York Fashion Week still gets a bad rap for championing overly commercial, derivative labels that wouldn’t stand a chance in Paris. European editors like to complain about New York and often fly in for the second part of the week, when the “real” designers show.

Of course, the naysayers aren’t entirely wrong: there is a fair amount of filler here. But nestled between the mass retailers hosting presentations and the uninventive middlers copying their peers, there is a healthy supply of fashion talent.

A veteran like Tomas Maier — who is German but lives in Florida and whose label is based in New York — doesn’t just promise, he delivers. With his namesake collection, the Bottega Veneta creative director aims to fill wardrobe holes without designing basics. This season’s selection was unfussy, if not minimalist. For instance, a rollneck cableknit sweater had voluminous sleeves in techy scuba jersey. That spongy material also gave shape to a simple shift. Last season’s bomber was updated in a quilted shattered-candy print, while a traditional pleated skirt was rendered in lacquered denim. Maier treated glitzy fabrics — plush velvet, silk embellished with bursts of stars — with a certain casualness: even the mini dresses and high-waist peg-leg trousers were worn with flats or low heels.

What’s probably most interesting about Maier’s collection is that it doesn’t feel designed for a specific woman or aesthetic. This reporter recently spied a feminine maximalist wearing one of his sweater coats. And yet, it’s easy to imagine a modernist reaching for this season’s woolly houndstooth popover with a drop waist. What’s more, Maier isn’t afraid to pull good-looking items —  like a contrast-ribbing half-zip pullover — from his men’s collection when he thinks it works for women’s. Perhaps the collection’s versatility reflects the fact that the designer spends a good percentage of his time in Florida, away from the influence of the fashion crowd. 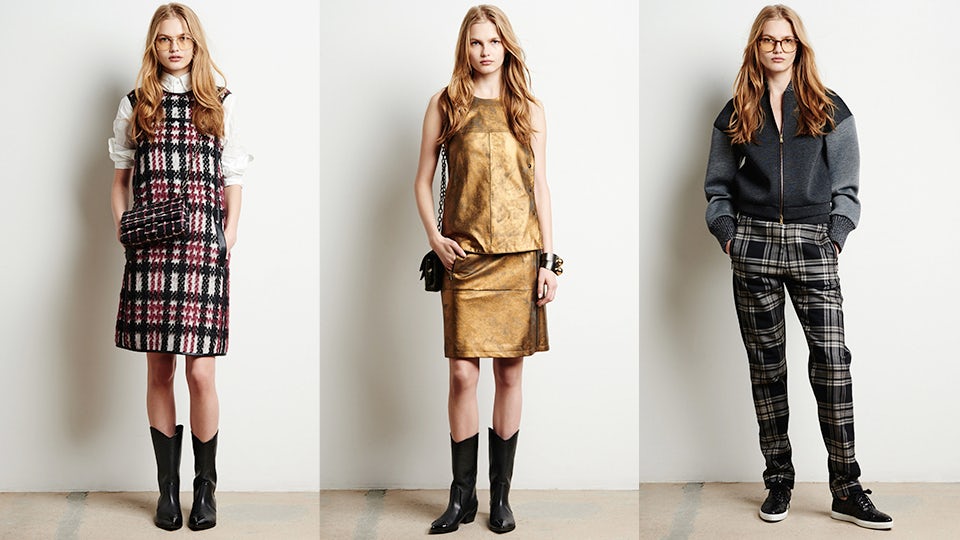 Other designers never sharpen their point of view enough to make a mark. Fortunately, Wes Gordon, a two-time CFDA/Vogue Fashion Fund finalist, has managed to do this nicely since coming onto the scene in 2010. This season, the designer’s Instagram-powered fashion show featured ideas he visits time and again. “What is it that I love doing? What do I do best?” he asked, rhetorically, at a preview.

The answer came in the form of 1990s-inspired slip dresses — cut squarely away from the body, topstitched and embroidered with a bit of flowers — a deep-V column dress in a dry, textured crepe and plenty of lace: dogwood, cobweb, sometimes layered together. The collection marked a romantic turn for Gordon. He reintroduced the flouncy ruffled tops he trialed in February 2012, although this time he exhibited more restraint.

After talking with Gordon many times over the past few years, it seems the biggest thing he learned from participating in the Fashion Fund was the importance of consistency — both in silhouette and in the general feel of the clothes. But if you don’t finesse it just right, consistency can feel rigid and boring, as it has in the past for Gordon. This time around, the designer’s approach felt smoother. 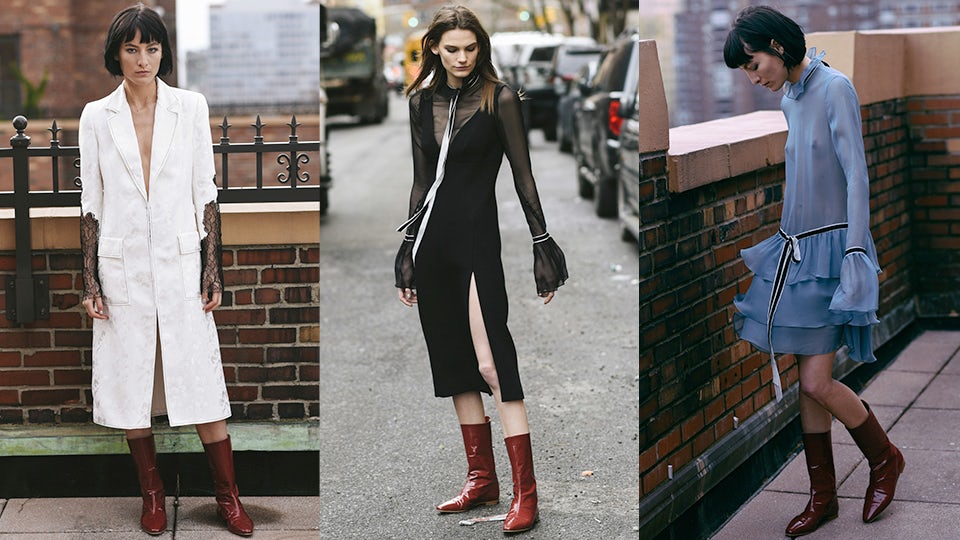 Sophie Theallet is certainly no slave to trends. Nearly a decade into launching her New York-based label, the French designer has broken through in a way that many had hoped she would for years. While the Alaïa protégé has always been well-respected and admired by critics, the initial energy she generated in 2007 burned off. Last season saw a marked shift, however: Theallet brushed aside the noise, hired influential stylist Jenke Ahmed Tailly and concentrated on making magnificent garments filled with emotion.

Backstage after her show — which featured a considered lineup of models, including Veronica Webb, with different racial and ethnic backgrounds and body types — she said that business was up season over season. “Fashion should be open, not closed,” she said. “You should make people dream. That’s what I want to do, I want people to be able to dream again.”

The models glowed in the multi-textural pieces, like a puffed up anorak rendered in gold-metallic leopard print with contrasting leopard patch pockets, a gathered-shoulder cape in rich zebra and a halter dress made out of cut black velvet that was tied up gorgeously in the front with an oversize bow. Theallet develops all of her own prints and sources couture fabrics, bonding soft materials to stiffen them up and create something new. There was just so much to absorb with each piece. The crowd was thrilled, just as Theallet had dreamed they would be. 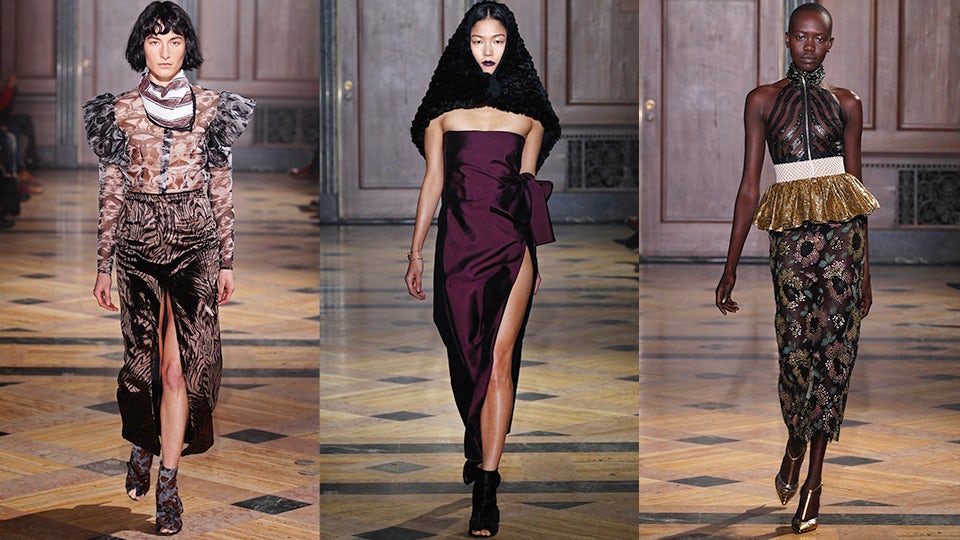 Just after Sophie Theallet was Monse, the two-season-old label designed by two veterans of Oscar de la Renta which has found swift success. Not only have red-carpet stylists embraced Laura Kim and Fernando Garcia’s new approach to eveningwear — rooted in twisting the standard collared shirt into something new and more formal — but buyers are on board as well. (Spring 2016 stockists include Net-a-Porter, Bergdorf Goodman, Neiman Marcus, Ikram in Chicago, Bloomingdale’s… the list goes on.)

There was plenty of buzz in the room as striped bias-cut dresses tied just so, double-breasted blazers designed to fall off the shoulder and buoyant bubble skirts bounced down the runway. Their draped velvet gowns had a louche desirability. But the bubble skirts and proportions were clumsy. The last set of looks were the biggest turn off. There is nothing to say about a black-lacquer puff-ball skirt, connected at the front with a crop top, except that it looked a bit like a trash bag (and not in a charming way like Alber Elbaz’s clutch for Lanvin a few seasons back).

The mullet ball-gown skirt had a similar unease. It's refreshing to see an American label doing something so overtly tacky. But that didn't seem to be the Monse designers'​ intention. They must stay focused on what makes a woman look both beautiful and special — not silly. 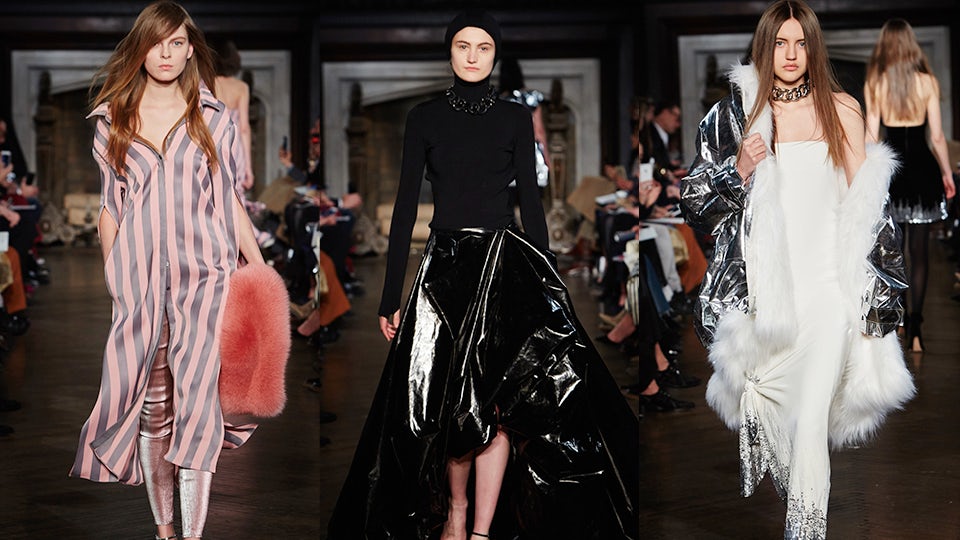 Adam Lippes, who showed his collection in the parlour of his warm-and-beautiful Washington Square Park home on Saturday morning, designs elegant clothes for the woman who likes to dabble in trends. This season, that meant plenty of engaging separates. There was a metallic pleated skirt, an elongated satin bomber done in a soft tropical print (a collaboration with the English wallpaper company de Gournay) and a three-gauge, double-face marigold-coloured cashmere sweater to name just a few.

Lippes, who says he likes to show the collection in his apartment because “clothes don’t live on a runway,” was particularly excited about a denim coat bonded to black shearling, which was made in New York and took more than a year to develop. What his designs lack, however, are clear brand signatures that make them unmistakably his. Although perhaps the only signifier he thinks he really needs is that his clothes bring pleasure to the wearer. He does have a way with print and it would be nice to see him develop that further as he goes. 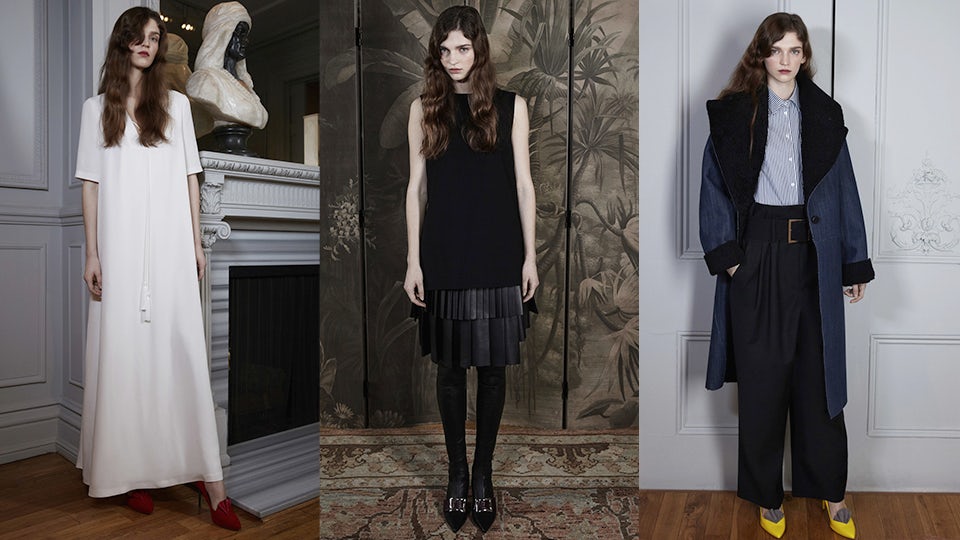 Speaking of signatures, designers Erin Beatty and Max Osterweis have a lockdown on off-kilter dresses and separates that somehow manage to be commercial, too. “We’re always torn between going toward something conceptual and something real,” Beatty said backstage after the show. “In this time of real chaos, you have to focus on who you are and who you want your girl to be. It’s kind of like, if you build it she will come. I hope that we did that with this collection and that it will make her feel weird and cool and together.”

Beatty and Osterweiss' tartans were particularly successful, rendered on schoolmarm dresses that were cut far away from the body and tiered for subtle ruffling. The designers also mixed woollier plaid tops and bottoms with stripes and geometric patterns to achieve that distinctly Suno blend. Their shiny damask embroidery was subtle but more intriguing than the all-over metallic pieces, which felt more like a reaction to what’s in the fashion ether. In all, the designers seem like they’re in a good place and more ready than ever to build on their early successes. 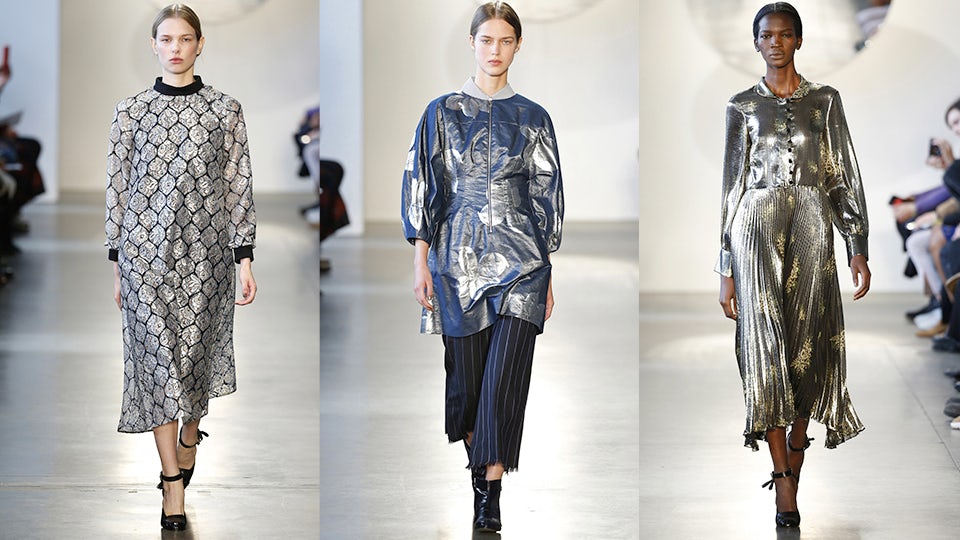 Ryan Roche is perhaps where Suno was five years ago. She has a clearly defined point of view and is receiving a lot of attention from both press and buyers, having recently signed the prominent showroom Rainbowwave to represent her in Europe. But Roche also has the fortune of living in Upstate New York, where things move a little more slowly. She’s not in a hurry to become the next great American brand and it’s perhaps precisely because of this that she could very well achieve it. “I feel really good,” she said. “We’re really aware of maintaining our growth in a healthy way — building it as it’s ready.”

The world of Ryan Roche was brought to life with added dimension by the band of Woodstock kids — including two of her own — performing David Bowie hits in the corner of the gym at Avenues, a private school in Chelsea. It was a nice way to pay tribute to the artist and bring his energy to the presentation without relying on expected sartorial tropes.

Roche was looking at Peter Lindbergh and Arthur Elgort photos from the late 1980s, aiming to capture the era’s feeling of rich minimalism. (She even added a few pieces of rabbit fur, sourced responsibly from France.) The beauty here was in the technique; one hand-knitted sweater took 96 hours to complete. Another, done in black mohair silk, was further texturized with a horizontal cable knit, sleeves long and languid. “The hand is so important to me. I don’t want it to feel scratchy,” Roche said. “I want it to feel super rich.” It’s nice to see a designer who knows exactly what she wants to achieve and be able to achieve it.

It’s interesting that Roche has a couple of things in common with talented European imports like Maier and Theallet. Like Maier, she lives and works outside New York City and away from the industry’s busy social scene. Like Theallet, she is intent on building her own world, based on a specific and unwavering point of view. It would be nice to see more of that from her American compatriots.