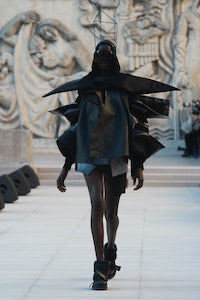 PARIS, France — “The story of life: hope, aspiration, corruption, collapse.” Rick Owens was wrestling with his nihilistic mood on a day when hope and despair duked it out in a Senate hearing room. He called his show Babel. In the centre of the massive terrace at Palais de Tokyo’s Parvis Bas, a skeletal tower burst into flames and blazed throughout the presentation. His models paraded around it, some of them carrying burning torches. Coverage of the show on the internet has already nailed the unwitting symbolism. “Burn down the patriarchy” was the wishful thought.

“Babel is the story of the way my brain works,” Owens explained, “flickering between hope, serenity, nihilism, anxiety. Nihilism can be a little adolescent and dramatic. Later, fatalism sets in, when you’re older. But I’m still dramatic.” He turns 57 in a month, and that’s making relevance an issue for him. “But I figure as long as I stay true to those fundamental values that everybody’s wrestling with, I’ll always be relevant. We’re all swinging between hope and nihilism.”

In that light, what was most striking about Rick’s collection was how celebratory it looked. Some of the models wore spindly, space age crowns. Others had huge sweeping robes, perforated to make “a brutalist lace.” Curtains of rubber fringe swirled. “Diana Vreeland once said that fringe is the most exciting part of the most exciting periods,” said Owens. “The 20s, the 60s…” Amidst the billow and swish, there were some striking, spiky, aerodynamic outfits. Were they wings? “No, scarves,” he corrected. Whatever, they looked dangerous.

That’s often been the case with an Owens woman. A warrior, like his wife Michele. But the eerie power projected by the models on his catwalk today obviously had a special relevance. His notes mentioned hexes. Please Lord, let these witches cast their spells and make it all better.