PARIS, France — Men's fashion week closed in Paris yesterday. The New York shows are soon to follow, but already the current men’s fashion conversation has condensed around the buzzword du jour: Reality. No excess, no provocation, no eccentricity, no giant leap forward. Embracing reality is what this season is about, which means bringing design out of the industry bubble and closer to end consumers. It’s no secret that sales need a big boost. Emerging markets may still be booming, but elsewhere the shops are packed with unsold merchandise, draped in invented narratives that no longer drive desire, because today's customers are too smart to believe the hype. Hence, this season’s wake-up call: let's get back to what’s real. 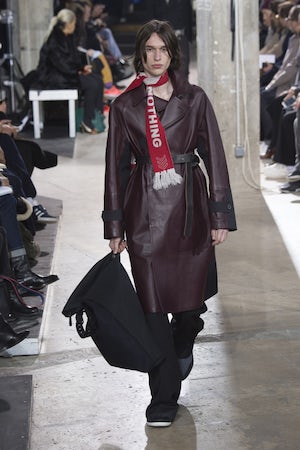 No more clothes made for Instagram. Just clothes themselves: as plain and banal as that. Milan was certainly on this wavelength, but in Paris the phenomenon was full blown. It’s not a complete surprise, all things considered. From the normcore trend to Vetements (and its avalanche of imitators) the love affair between creators and the so-called real world has been growing for quite a while. Reality on the catwalk, as oddly theatrical as that may sound, is the logical conclusion. But this isn't normality as in plain-ness: generic garments for the average man. That's out of the question. In order to reenergise consumers, a renewed focus on design is critical and design requires invention (or at least reinvention). It requires the kind of effort that normality lacks.

The riddle, and the struggle, to paraphrase Lucas Ossendrijver — who succeeded in giving Lanvin’s man a grittier, sportier, let's say edgier spin than usual without sacrificing the sophistication of the tailoring work that's so integral to the house codes — was about elevating the everyday. Indeed, Paris was all about elevating the everyday. And this, despite the general sense of ennui, put the audience in a cheerful mood. Finally, we saw clothes people might actually want to buy and wear. Lots of them.

But as the American poet Wallace Stevens wrote, reality is a product of the imagination, meaning the truth lies firmly in the eye of the beholder. So, of course, in Paris, there were as many realities as there were designers. A certain straightforwardness was the common denominator, however: clothes presented plainly as clothes, not as concepts. It's always been the case for Lemaire, whose streamlined and utterly sophisticated take on the masculine wardrobe felt particularly relevant this season. The same applies to Pierre Maheo's Officine Generale and Alexandre Mattiussi’s Ami, both outings being, right from their inception, ruminations on the foundations of the masculine wardrobe, served with a French zing of panache and nonchalance. 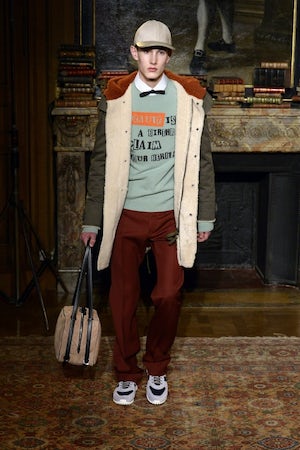 Now the sole creative director for Valentino, even Pierpaolo Piccioli opted for clarity and concision — give or take an embroidered slogan or two. Thankfully removed from his covering of camouflage, butterflies and over-decoration, the Valentino man finally looked gentle and real. Piccioli’s twisted take on Englishness had something of very early Raf Simons about it, but the designer infused the collection with a Roman charm that's so quintessentially his own and did so with gusto.

For his debut at LVMH men’s label Berluti, Haider Ackermann kept things decidedly real, adding his personal sensibility for colour and texture. Groundbreaking it was not, yet it made the brand's appeal solid and slightly more fashion-forward than it was during Alessandro Sartori's tenure. Which raises a big question: does the Berluti price tag actually fit fashion product, or should the label stick to classics? Hermès leans towards classicism, while Berluti goes the other way, though the brand clearly sees Hermès as a benchmark. Dries van Noten, too, benefited from a renewed interest in real clothes, delivering a strong line up of plain yet utterly desirable pieces.

Luke Meier, who together with his wife Lucie is rumoured to be taking over the creative helm at Jil Sander, delivered a punchy take on functionalism at OAMC. The label's first catwalk outing looked fast, furious and extremely promising. At Sacai, meanwhile, function offered another opportunity for a wonderfully inventive foray into cut-up and hybrid. But nowhere did function appear as central as at Junya Watanabe, a galore of street-worthy outerwear developed with The North Face.

Which brings us to another corollary of reality: authenticity. According to the contemporary fashion gospel, in fact, a real garment is a garment that keeps its faith to the archetype from which it is derived. In order to do so, it becomes almost mandatory to produce it according to the exact original standards. Hence, the proliferation of co-branded collaborations with specialist labels that keep popping up across the fashion system. Junya Watanabe actually paved the way for the approach over ten years ago, but Vetements re-ignited the phenomenon last season. 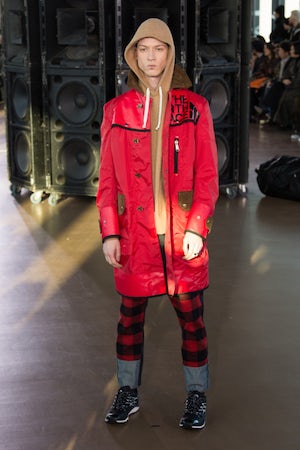 Of course, co-branding is a matter of hype as much as authenticity, which was apparent in the devilish coupling of Supreme and Louis Vuitton on Kim Jones’ runway this season: a marriage clearly calculated to ignite rabid appetites. Will it work? In a sense, it’s working already. The internet is abuzz. But for Supreme, the side-effects of the partnership could include a severe diminishing of the cool factor of the cult brand, which was built on resisting what some would call “selling out.” But the collaboration is powerful testament to the idea that, today, it's increasingly about more accessibly-priced product in limited edition — just like those deliciously straightforward Balenciaga sweatshirts that Demna Gvasalia put on the runway.

At the shows, communications gurus are already talking about reality storytelling. Because, in fact, reality in fashion is ultimately fiction. There is no way to escape the conundrum but to enjoy the momentary aesthetic evolution it brings.

Then again, it's not just about fashion embracing reality. It is also that reality that keeps infiltrating fashion in the most insidious ways. As the political clock is set backwards across the Western world, suited businessman are making an unexpected comeback where you would least expect them. The whole idea of the suit as armour charged with both political and sexual power is suddenly very relevant. So much so that double-breasted American Psychos even landed on the edgy shores of Acne Studios, not to mention Balenciaga. Indeed, a strong pair of shoulders and a suit as hard as a bulletproof shield are perhaps required to face reality nowadays. Indeed, that's the real challenge in the air today — no brand storytelling needed.