In a world turning darker by the day, Etro, Sportmax, Marco de Vincenzo and Massimo Giorgetti all turned to forms of escapism — surfing, childhood memories and dreams — with varying degrees of success.

In a world turning darker by the day, Etro, Sportmax, Marco de Vincenzo and Massimo Giorgetti all turned to forms of escapism — surfing, childhood memories and dreams — with varying degrees of success.

MILAN, Italy — The world is getting darker and darker. So much so that the will to escape is turning into an urge. Escapism is looming large on the Milanese catwalks, taking quite a few different forms. There is geo-cultural escapism: a look at other geographies, cultures and subcultures.

Surfing, for instance. Veronica Etro went surfing from the American West Coast all the way to Japan only to end up on the imaginary Paisley Islands and call it Pacific Zen. Whatever that means, it's a catchy phrase. Quite a journey, if you ask me. One that was kept together by Etro's defining sense of nonchalance and eclecticism. The collection was filled with the house's trademarks: floaty dresses, slouchy tailoring, easy knitwear. 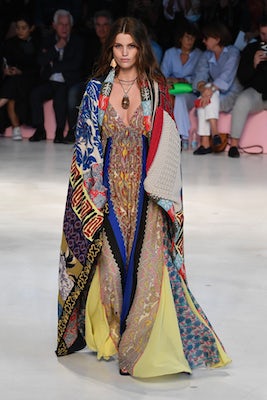 Yet, it incorporated nods to scuba, and featured an active side that mixed well with all the usual bohemia. The result was charming: free spirited yet devoid of the hippie whiffs which sometimes get a bit overbearing at Etro. The move was even more relevant this season, with the house celebrating its 50th anniversary. This was, in fact, Etro looking forward, not backwards.

Curiously, surfing was the chosen theme also at Sportmax, Max Mara's edgy sister. Despite keeping a relatively low profile, the brand is an interesting experiment in incorporating fashion-forward trends, the Max Mara way. Over the past few seasons, the focus has been strongly on the sport part of Sportmax.

The outlook, however, is always metropolitan, rather than active: sharp lines, fearless volumes and firm fabrics for modular pieces with a bold graphic appeal. Surfing, thereafter, was mostly a matter of details, fabrications and styling: zippers, scuba-like surfaces, pseudo wet hair.

It made for a succession of catchy items that at times looked a bit too hard, just like the icy cold, hyper cool woman wearing them. A zing of softness, in the future, would be welcome in order to make things more real. 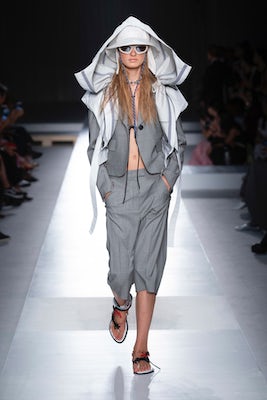 Delving in childhood memories is another form of escapism. That's what Marco de Vincenzo did, re-enacting recollections of lazy Sicilian summers and an aunt visiting from the United States. This meant, basically, a hybrid of American and Sicilian clichés in de Vincenzo's trademark graphic 'n psychedelic way. There were camisoles, and exposed lingerie, and then sweatshirts with pleated silk backs, chiffon jean jackets and Superga plimsolls with gigantic soles.

It was nice, but just nice honestly. The sophisticated playfulness de Vincenzo is so good at was missing, and the goings got a bit formulaic, with little élan. Furthermore, there was a problem of image: the black slipdresses with pop sock verged a bit too much towards Dolce & Gabbana.

The duo have created such a strong visual identity, it's like they own Sicily; a drag, for another Sicilian like de Vincenzo, but one that needs to be overcome more boldly.

Finally, there's classic escapism: running away into dreams. Massimo Giorgetti at MSGM built the entire show around Depeche Mode's anthem “Dream On,” calling into play an idea of lucid dream; lucid as shiny, actually, given the abundance of flimsy materials cut into sharp pantsuits. 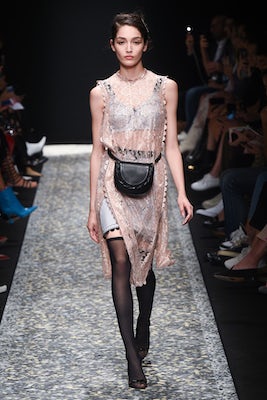 There were lots of roses as prints, and draped jersey dresses, but this collection felt like a devolution for the brand, which is strange given the recent injection of funding from private equity investor Style Capital. Everything was so easy, product-driven and plain, it did not really require a show.

Escapism needs something grandiose, or at least noteworthy.