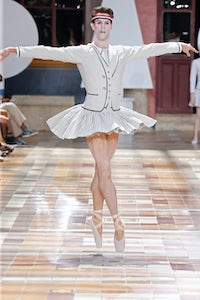 PARIS, France — Men in heels, with nipped waists and protruding hips? Why not? Such a vision is certainly not shocking at Thom Browne.

Working on endless variations of the suit, and on an idea of perverted hyper-classicism, the American designer has long subverted notions of what men should look like. On the catwalk, at least. The core business of bizarrely proportioned yet somehow exaggeratedly proper suits is a different story altogether. Over the years, Browne has perfected the art of the ritualistic, theatrical performance: an operation in which clothing becomes something akin to costumes for a play. The entertainment is certainly high, and the craftsmanship is superb, almost at couture level, but somehow one questions the validity of it all on a bigger scale.

As the sole narrative built around the label — TB creates no advertising campaigns — these shows, with their pace and symbolism, can feel a bit cryptic.

This season, though, the story was not that difficult to get. Spectators were invited into the secret garden of Mr. Brun, played by James Whiteside, principal dancer at American Ballet Theatre. The year is 1772, and men are wearing crinolines because in the secret garden everything is possible. But the year is 2019, too, and men are wearing codpieces on top of it. That's the idea: sports and paniers explored through shapely silhouettes done exclusively in pastel-hued seersucker. That's it.

It made for some seriously sculptural, twistedly silly shapes and for quite some fun. The heavy play on the gender codes and the heels, however, is wearing a little thin: it makes for pieces that can hardly translate into wearable ones and that, as such, are confined to l'art pour l'art.